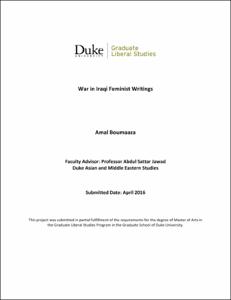 View / Download
479.6 Kb
Date
Author
Boumaaza, Amal
Advisor
Jawad, Abdul Sattar
Repository Usage Stats
548
views
1,593
downloads
Abstract
This study focuses on a selection of writings of three prominent Iraqi women about the war in Iraq and its aftermath using an analytical and descriptive method. The writers studied in this thesis are well known in the Arab world and won worldwide recognition and literary awards. The selection of novels and short stories came as a result of sifting the works that reflect the feminist mood and sentiment during a harsh period of violence and conflict that left Iraqi women struggling with huge and difficult responsibilities to fill the gap and vacuum created by the war with Iran (1980-1988) and the first Gulf War 1990, then the invasion of Iraq in 2003. Chapter One will be a general introduction of the impact of the war on Iraqi women and their reaction to the consequences of the violence and the turmoil during the last three decades in Iraq. Although the fallout of war was widely treated by male writers, women fiction writings hold a significant position in war literature, hence the focus in this thesis on the three feminist writers who won merited acclaim. Chapter Two is devoted to Diasy Al-Amir’s short stories that display a deep sentiment and vividly reflect a woman’s feeling of the harshness and severe impact of first, the civil war in Lebanon (1975-1990), as well as the Iran – Iraq war when Daisy returned to her country to find it in a more vicious conflict that took a sectarian leaning. Daisy Al-Amir is regarded a genuine representative of Iraq’s short story and deservedly won international acclaim. She excels in the genre of short story, immersed in difficult situations depicted in her collections of short fiction. Chapter Three examines the works of Lutfiya Al-Dulaimi, a writer and journalist, who occupies a unique position in Iraq’s literary map. She, more than the other feminists, led a campaign to portray the situation of Iraqi and Arab women with focus on the war. Al-Dulaimi’s writings reflect the impact of the war on herself and on her society. Chapter Four focuses on Dunya Mikhaill’s war poetry written while she was inside Iraq as well as her poems published in exile. The choice of Dunya stems from her achievement as a poet and how, through her poetry, shares the agony and suffering of her people. The vehicle of poetry is the most effective means of expression to embody an agonizing experience especially of women who were burdened with tremendous amount of pressure, fear, hopelessness, and loss of the beloved ones. Her prose poems will be discussed with reference to her sources of influence, namely the Bible and Iraq’s classical literature.
Type
Master's thesis
Department
Graduate Liberal Studies
Subject
Daisy Al-Amir. Lutfiya Al-Dulaimi. Dunya Mikhaill. Iraq. War in Iraq
Permalink
https://hdl.handle.net/10161/11975
Citation
Boumaaza, Amal (2016). War in Iraqi Feminist Writings. Master's thesis, Duke University. Retrieved from https://hdl.handle.net/10161/11975.
Collections
More Info
Show full item record