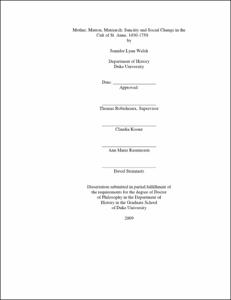 As a saint with no biblical or historical basis for her legend, St. Anne could change radically over time with cultural and doctrinal shifts even as her status as Mary's mother remained at the core of her legend and provided an appearance of consistency. "Mother, Matron, Matriarch: Sanctity and Social Change in the Cult of St. Anne, 1450-1750" takes issue with the general view that the cult of St. Anne in Northern Europe flourished in the late Middle Ages, only to wither away in the Reformation, and advances a new understanding of it. It does so by taking a longer view, beginning around 1450 and extending to 1750 in order to show how St. Anne's cult and the Holy Kinship elucidated long-term shifts in religious and cultural mores regarding the relationships between domesticity and sanctity, what constituted properly pious lay behavior, and attitudes towards women (in particular older women). Materials used include vita, devotional texts, confraternal records, sermons, treatises, and works of art across the time period under investigation. After a definite period of decline during the mid-sixteenth century (as evidenced by lower pilgrimage statistics, confraternity records, and a lack of text production), St. Anne enjoyed a revival in seventeenth- and eighteenth-century Catholicism in a "purified" form, reconfigured to suit new religious and social norms which emphasized patriarchal authority within the household and obedience to the Catholic Church among the laity. In this context, St. Anne became a humble, pious widow whose own purity serves as proof of Mary's Immaculate Conception, and whose meek devotion to her holy daughter and grandson exemplified properly obedient reverence for the laity.