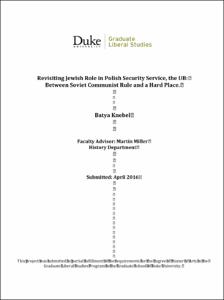 View / Download
1.6 Mb
Date
Author
Knebel, Batya
Advisor
Miller, Martin A
Repository Usage Stats
382
views
2,350
downloads
Abstract
This research paper provides insight into the political considerations and goals of the regime to institute a new order in Poland. It is ironic that after World War II, at the very time when the Jewish people was recovering from near-elimination, they become the enforcers of Soviet authority in Poland. The research challenges the Polish denial of anti-Semitism and false truth by investigating how Jews became the convenient, trusted employees with sensitive positions in Poland’s controlled intelligence organization, particularly in the wake of the war’s destruction, as well as being regarded as racially inferior and “enemies of the state” in postwar Poland. The study fills the gaps in the current historiography of the period in understanding the limits of Jewish participation in its service. My statistical analysis of IPN tables shows that Jewish participation in the managerial positions of the security service was not proportionally that high to warrant the stereotypical accusation of over representation, but rather it points to other variables that were involved in shaping this stereotype. Ironically, the small fraction of the surviving Jews, who was represented in the new post-war power structure, had limited influence on security issues. Post-war years were marked with intense attacks on Jewish communities, which the government did not succeed to control.
Type
Master's thesis
Department
Graduate Liberal Studies
Subject
Poland, Jews, Secret Service, 1945-1948, UB
Permalink
https://hdl.handle.net/10161/11991
Citation
Knebel, Batya (2016). Revisiting Jewish Role in Polish Security Service, the UB: Between Soviet Communist Rule and a Hard Place 1945-1948. Master's thesis, Duke University. Retrieved from https://hdl.handle.net/10161/11991.
Collections
More Info
Show full item record