Meditation-State Functional Connectivity (msFC): Strengthening of the Dorsal Attention Network and Beyond. 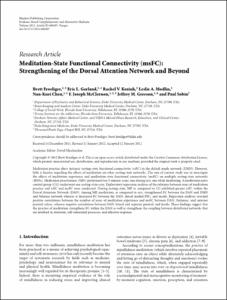 Adjunct Associate Professor in the Department of Radiology
Dr. Chen is a magnetic resonance imaging (MRI) physicist with research interest in fast image acquisition methodology, pulse sequence design, MRI artifact correction, and application of MRI to studies of neurological diseases. He has been developing novel high-resolution imaging protocols and analysis procedures for mapping structural and functional connectivity of brains. More generally, Dr. Chen's research involves the application of MRI in translational contexts. He has been serving as the pr Professor in Psychiatry & Behavioral Sciences
Joe McClernon, Ph.D. is a Professor in the Department of Psychiatry and Behavioral Sciences, Founder/Director of the Center for Addiction Science and Technology (CfAST), and Director of Evaluation and Strategic Planning in the Duke Clinical and Translational Science Institute (CTSI). He earned a Ph.D. in clinical psychology in 2001 from Southern Illinois University-Carbondale and completed a postdoctoral fellowship at Duke in 2002. He served as Director of the Addiction Division in Psychiatry
Alphabetical list of authors with Scholars@Duke profiles.