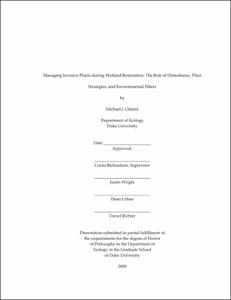 Since wetlands provide many important ecosystem services, there is much interest in protecting existing wetlands and restoring degraded wetlands. Yet, degraded wetlands and restoration sites are often vulnerable to plant invasions that can hinder restoration success. Invasive plants typically reduce biodiversity and alter important ecosystem functions and services. This dissertation examines the ecological impact and management of invasive plant species during wetland restoration with a focus on three important drivers of plant community change in wetland ecosystems: disturbance, plant strategies, and environmental filters.

The second objective of this research was to better quantify the impact of the distinct and extreme anaerobic/aerobic annual cycle on the plant community in Palo Verde Marsh. Since the impact of seasonal flooding on the plant community in seasonal wetlands is often most evident after disturbance, I created gaps in the wetland vegetation via the mechanical removal of emergent vegetation and then measured plant community change using surveys of the wet and dry season standing vegetation, the seed bank, and <italic>in situ</italic> seedling recruitment. As expected, seasonal flooding acted as an environmental filter and resulted in distinct dry and wet season assemblages. The dominant plant life forms present after vegetation removal differed between seasons with emergents dominating during the dry season and floating-rooted, free-floating, and submerged species more dominant during the wet season. I identified common species that are characteristic of both seasonal assemblages and used indicator species analyses to identify species that are only likely to be found during the wet season. I also characterized the seed bank at this site; like most seasonal wetlands, plant species' resilience in this wetland were dependent upon a large and diverse seed bank which allowed many species to revegetate after disturbance and the extreme wet/dry conditions which acted like environmental filters.

In addition to the experiments conducted in Palo Verde Marsh, this dissertation also presents the results from an experiment in a temperate riparian restoration site in the North Carolina Piedmont (Sandy Creek, Duke Forest Stream and Wetland Assessment and Management Park, Durham, NC). Since riparian restoration efforts in the southeastern U.S. are often hindered by invasive non-native plants, there is much interest in approaches that can be used to reduce the impact of invasive non-native plant populations at the local level (e.g., a restoration site). In addition to the impact of non-native species-specific removal efforts, there is also much interest in the identification and assessment of native competitive-dominant plant species that can be used during riparian restoration to support important ecosystem functions and reduce non-native invasibility. <italic>Ligustrum sinense</italic> (Chinese privet) is a very common invasive non-native shrub in the region. <italic>Arundinaria gigantea</italic> (giant cane) is a native bamboo species that used to be very abundant in riparian and wetland ecosystems in the region. The objectives of this phase of the research were to: (1) measure the plant community response to removal of mature <italic>L. sinense</italic> individuals; and (2) quantify planted <italic>A. gigantea</italic> clonal expansion in the presence of other plants, particularly common non-native invasive species. Due to its potential for rapid growth and expansion, it was hypothesized that <italic>A. gigantea</italic> would be able to compete with common non-native species and reduce non-native invasibility. In a three-year split-plot experimental design, I applied a Privet-Presence treatment at two levels (Privet Present, Privet Removed) and a Cane-Planting treatment also at two levels (Cane, No Cane). The privet removal treatment resulted in 100% mortality of mature privet individuals. After privet removal, <italic>L. sinense</italic> seedlings recruited into these plots but growth has been very slow and these <italic>L. sinense</italic> individuals are not yet dominant. The privet canopy allows minimal understory plant recruitment and growth and privet removal resulted in an increase in species richness and diversity in the first year. However, in these Privet-Removed plots, a non-native invasive annual grass (<italic>Microstegium vimineum</italic>) invaded, became the most dominant species, and reduced species richness and diversity. In Privet-Removed plots, <italic>A. gigantea</italic> clonal expansion (i.e., ramet density, genet area, ramet diameter, and ramet height) was small in the first year but increased in the second and third years. Importantly, in Privet-Removed plots where <italic>A. gigantea</italic> was planted, <italic>M. vimineum</italic> cover was lower and species richness and diversity were greater; planting <italic>A. gigantea</italic> appears to have facilitated the establishment of other species and, in the process, increased diversity.

Our results emphasize several general conclusions that are applicable to other restoration efforts in other ecosystems with other plant species. First, during ecological restoration, invasive non-native plant removal alone will typically not restore native plant communities. Non-native invasive plant populations are typically very resilient to removal. Hence, long-term reductions in non-native invasibility will often require additional management efforts. For example, in the tropics my research showed the effectiveness of Fangueo for reducing <italic>Typha</italic> monocultures and increasing native plant and bird diversity. Another approach for improving ecosystems functions and reducing non-native invasibility after invasive plant removal is to carefully select and plant native species with competitive-dominant traits that will be able to compete with invading non-native species and resist invasion. Although this seemingly simple approach is often used by restoration practitioners, the results are rarely monitored and surprisingly few studies are designed to explicitly identify and investigate the performance of these important native competitive-dominant species.