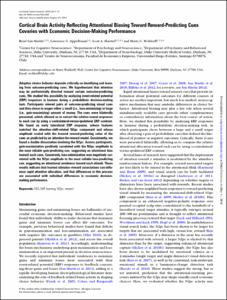 Professor in the Department of Psychology and Neuroscience
Research in my laboratory investigates the brain mechanisms underlying economic and social decision making; collectively, this research falls into the field of &ldquo;decision neuroscience&rdquo; or "neuroeconomics". My laboratory uses fMRI to probe brain function, behavioral assays to characterize individual differences, and other physiological methods (e.g., eye tracking, pharmacological manipulation, genetics) to link brain and behavior. Concurrent with research on basic processes, my labo