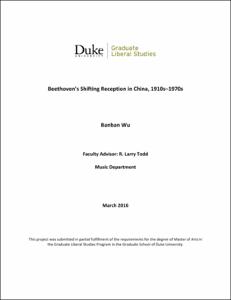 View / Download
351.2 Kb
Date
Author
Wu, Banban
Advisor
Todd, Larry
Repository Usage Stats
271
views
373
downloads
Abstract
Since the late 1970s, Beethoven has remained the best-known Western composer in China. His music has been written into China’s music textbooks and is frequently played by orchestras all around the country. However, this popularity among the Chinese was not always the case. This project explores how and why Beethoven’s music experienced ups and downs in popularity in China from the 1910s to the 1970s. Specifically, I examine how the Chinese people’s attitudes toward and interpretations of Beethoven’s music underwent several dramatic shifts between the 1910s, when his music was first introduced to China, and the late 1970s, when the Chinese ultimately came to admire his music in a way similar to Western audiences. The Chinese people’s shifting attitudes toward Beethoven throughout the twentieth century serve as a cultural index in two respects: by indicating China’s relationship to the West, especially to Western art; and by indicating the cultural effects of China’s own political exigencies. This paper draws on both primary and secondary sources to examine the causes of the shifting perception. The primary sources, which will be used to reconstruct the stages of Beethoven’s reception in China and the distinct historical context of each period, include Chinese newspapers and magazine articles, Chinese government documents, and the biographies and essays of Chinese authors. Secondary sources, which will be used to frame the analysis of the primary materials, will include scholarly works from the fields of ethnomusicology, cultural history, China Studies, aesthetics, and Beethoven studies. One possible explanation for the dramatic fluctuations in the reception of Beethoven’s music in China may be that the Chinese people mainly treated music as a tool, valuing it only for its usefulness at any given time. The Chinese people’s overvaluation of music’s utility—of its capacity to meet the nation’s core needs at any given time—may explain why, from the 1910s to the 1970s, the popularity of Beethoven’s music in China experienced such ups and downs.
Type
Master's thesis
Department
Graduate Liberal Studies
Subject
Beethoven
Music
Permalink
https://hdl.handle.net/10161/12032
Citation
Wu, Banban (2016). Beethoven’s Shifting Reception in China, 1910s–1970s. Master's thesis, Duke University. Retrieved from https://hdl.handle.net/10161/12032.
Collections
More Info
Show full item record