Lessons from the 2015 earthquake(s) in Nepal: implication for rehabilitation. 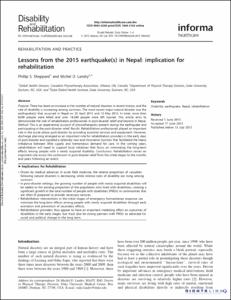 View / Download
199.3 Kb
Date
Authors
Sheppard, Phillip S
Landry, Michel D
Repository Usage Stats
260
views
920
downloads
Abstract
PURPOSE: There has been an increase in the number of natural disasters in recent history, and the rate of disability is increasing among survivors. The most recent major natural disaster was the earthquake(s) that occurred in Nepal on 25 April 2015 and 12 May 2015. In total, more than 8500 people were killed and over 18,500 people were left injured. This article aims to demonstrate the role of rehabilitation professionals in post-disaster relief and beyond in Nepal. METHOD: This is an experiential account of physiotherapists present during the earthquake and participating in the post-disaster relief. RESULTS: Rehabilitation professionals played an important role in the acute phase post-disaster by providing essential services and equipment. However, discharge planning emerged as an important role for rehabilitation providers in the early days of post-disaster and signaled a relatively new and innovative function that facilitated the heavy imbalance between little supply and tremendous demand for care. In the coming years, rehabilitation will need to support local initiatives that focus on minimizing the long-term effects among people with a newly acquired disability. CONCLUSIONS: Rehabilitation serves an important role across the continuum in post-disaster relief from the initial stages to the months and years following an event. IMPLICATIONS FOR REHABILITATION: Driven by medical advances in acute field medicine, the relative proportion of casualties following natural disasters is decreasing, while relative rates of disability are rising among survivors. In post-disaster settings, the growing number of people with newly acquired disabilities will be added to the existing proportion of the population who lived with disabilities, creating a significant growth in the total number of people with disabilities (PWDs) in communities that are often ill prepared to provide necessary services. Rehabilitation interventions in the initial stages of emergency humanitarian response can minimize the long-term effects among people with newly acquired disabilities through early activation and prevention of secondary effects. Rehabilitation providers thus appear to have an important mediating effect on outcomes of disabilities in the early stages, but must also be strong partners with PWDs to advocate for social and political change in the long term.
Type
Journal article
Subject
Disability
Nepal
earthquake
rehabilitation
Attitude of Health Personnel
Disabled Persons
Disaster Planning
Disasters
Earthquakes
Humans
Needs Assessment
Nepal
Physical Therapists
Rehabilitation
Relief Work
Survivors
Permalink
https://hdl.handle.net/10161/12044
Published Version (Please cite this version)
10.3109/09638288.2015.1064482
Publication Info
Sheppard, Phillip S; & Landry, Michel D (2016). Lessons from the 2015 earthquake(s) in Nepal: implication for rehabilitation. Disabil Rehabil, 38(9). pp. 910-913. 10.3109/09638288.2015.1064482. Retrieved from https://hdl.handle.net/10161/12044.
This is constructed from limited available data and may be imprecise. To cite this article, please review & use the official citation provided by the journal.
Collections
More Info
Show full item record Professor in Orthopaedic Surgery
Dr. Landry is a health policy and health services researcher, and global health practitioner.  His area of current exploration is the interface between available supply (financial and human resources) and increasing demand for health and rehabilitation services across the continuum of care within the United States, Canada, and the global community.