Reading the Book of Life: Contingency and Convergence in Macroevolution 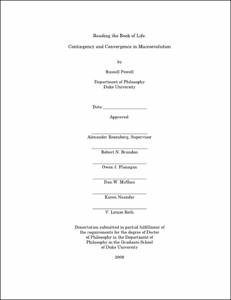 This dissertation explores philosophical problems in biology, particularly those relating to macroevolutionary theory. It is comprised of a series of three papers drawn from work that is currently at the publication, re-submission, and review stage of the journal refereeing process, respectively. The first two chapters concern the overarching contours of complex life, while the third zeroes in on the short and long-term prospects of human evolution.

The rhetorical journey begins with a thought experiment proposed by the late paleontologist Stephen Jay Gould. Gould hypothesized that replaying the "tape of life" would result in radically different evolutionary outcomes, both with respect to animal life in general and the human species in particular. Increasingly, however, biologists and philosophers are pointing to convergent evolution as evidence for replicability and predictability in macroevolution. Chapters 1 and 2 are dedicated to fleshing out the Gouldian view of life and its antithesis, clarifying core concepts of the debate (including contingency, convergence, constraint and causation), and interpreting the empirical data in light of these conceptual clarifications. Chapter 3 examines the evolutionary biological future of the human species, and the ways in which powerful new biotechnologies can shape it, for better and for worse. More detailed chapter summaries are provided below.

In Chapter 1, I critique a book-length excoriation of Gould's contingency theory written by the paleobiologist Simon Conway Morris, in which he amasses and marshals a good bulk of the homoplasy literature in the service of promoting a more robust, counter-factually stable account of macroevolution. I show that there are serious conceptual and empirical difficulties that arise in broadly appealing to the frequency of homoplasy as evidence for robustness in the history of life. Most important is Conway Morris's failure to distinguish between convergent (`externally' constrained) and parallel (`internally' constrained) evolution, and to consider the respective implications of these significantly different sources of homoplasy for a strong adaptationist view of life.

In so doing, I propose a new definition of parallel evolution, one intended to rebut the common charge that parallelism differs from convergence merely in degree and not in kind. I argue that although organisms sharing a homoplastic trait will also share varying degrees of homology (given common decent), it is the underlying developmental homology with respect to the generators directly causally responsible for the homoplastic event that defines parallel evolution and non-arbitrarily distinguishes it from convergence. I make use of the philosophical concept of `screening-off' in order to distinguish the proximate generators of a homoplastic trait from its more distal genetic causes (such as conserved master control genes).

In Chapter 2, I critically examine a recent assessment of the contingency debate by the philosopher John Beatty, in which he offers an interpretation of Gould's thesis and argues that it is undermined by iterative ecomorphological evolution. I develop and defend alternative concepts of contingency and convergence, and show how much of the evidence generally held to negate the contingency thesis not only fails to do so, but in fact militates in favor of the Gouldian view of life. My argument once again rests heavily on the distinction between parallelism and convergence, which I elaborate on and defend against a recent assault by developmental biologists, in part by recourse to philosophical work on the ontological prioritization of biological causes.

In Chapter 3, I explore the probable (and improbable) evolutionary biological consequences of intentional germ-line modification, particularly in relation to human beings. A common worry about genetic engineering is that it will reduce the pool of genetic diversity, creating a biological monoculture that could not only increase our susceptibility to disease, but even hasten the extinction of our species. Thus far, however, the evolutionary implications of human genetic modification have remained largely unexplored. In this Chapter, I consider whether the widespread use of genetic engineering technology is likely to narrow the present range of genetic variation, and if so, whether this would in fact lead to the evolutionary harms that some authors envision. By examining the nature of biological variation and its relation to population immunity and evolvability, I show that not only will genetic engineering have a negligible impact on human genetic diversity, but that it will be more likely to ensure rather than undermine the health and longevity of the human species. To this end, I analyze the relationship between genotypic and phenotypic variation, consider process asymmetries between micro and macroevolution, and investigate the relevance of evolvability to clade-level persistence and extinction.