Interpreting Human Genetic Variation through Genomics and In Vivo Models 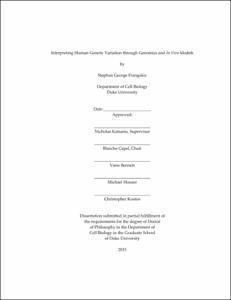 Improvements in genomic technology, both in the increased speed and reduced cost of sequencing, have expanded the appreciation of the abundance of human genetic variation. However the sheer amount of variation, as well as the varying type and genomic content of variation, poses a challenge in understanding the clinical consequence of a single mutation. This work uses several methodologies to interpret the observed variation in the human genome, and presents novel strategies for the prediction of allele pathogenicity.

Using the zebrafish model system as an in vivo assay of allele function, we identified a novel driver of Bardet-Biedl Syndrome (BBS) in CEP76. A combination of targeted sequencing of 785 cilia-associated genes in a cohort of BBS patients and subsequent in vivo functional assays recapitulating the human phenotype gave strong evidence for the role of CEP76 mutations in the pathology of an affected family. This portion of the work demonstrated the necessity of functional testing in validating disease-associated mutations, and added to the catalogue of known BBS disease genes.

Further study into the role of copy-number variations (CNVs) in a cohort of BBS patients showed the significant contribution of CNVs to disease pathology. Using high-density array comparative genomic hybridization (aCGH) we were able to identify pathogenic CNVs as small as several hundred bp. Dissection of constituent gene and in vivo experiments investigating epistatic interactions between affected genes allowed for an appreciation of several paradigms by which CNVs can contribute to disease. This study revealed that the contribution of CNVs to disease in BBS patients is much higher than previously expected, and demonstrated the necessity of consideration of CNV contribution in future (and retrospective) investigations of human genetic disease.

Finally, we used a combination of comparative genomics and in vivo complementation assays to identify second-site compensatory modification of pathogenic alleles. These pathogenic alleles, which are found compensated in other species (termed compensated pathogenic deviations [CPDs]), represent a significant fraction (from 3 – 10%) of human disease-associated alleles. In silico pathogenicity prediction algorithms, a valuable method of allele prioritization, often misrepresent these alleles as benign, leading to omission of possibly informative variants in studies of human genetic disease. We created a mathematical model that was able to predict CPDs and putative compensatory sites, and functionally showed in vivo that second-site mutation can mitigate the pathogenicity of disease alleles. Additionally, we made publically available an in silico module for the prediction of CPDs and modifier sites.

These studies have advanced the ability to interpret the pathogenicity of multiple types of human variation, as well as made available tools for others to do so as well.