Studies in Aetiology and Historical Methodology in Herodotus 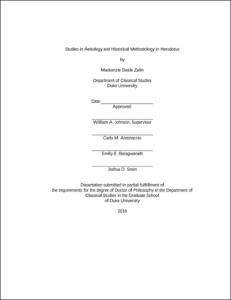 This dissertation interrogates existing scholarly paradigms regarding aetiology in the Histories of Herodotus in order to open up new avenues to approach a complex and varied topic. Since aetiology has mostly been treated as the study of cause and effect in the Histories, this work expands the purview of aetiology to include Herodotus’ explanations of origins more generally. The overarching goal in examining the methodological principles of Herodotean aetiology is to show the extent to which they resonate across the Histories according to their initial development in the proem, especially in those places that seem to deviate from the work’s driving force (i.e. the Persian Wars). Though the focus is on correlating the principles espoused in the proem with their deployment in Herodotus’ ethnographies and other seemingly divergent portions of his work, the dissertation also demonstrates the influence of these principles on some of the more “historical” aspects of the Histories where the struggle between Greeks and barbarians is concerned. The upshot is to make a novel case not only for the programmatic significance of the proem, but also for the cohesion of Herodotean methodology from cover to cover, a perennial concern for scholars of Greek history and historiography.

Chapter One illustrates how the proem to the Histories (1.1.0-1.5.3) prefigures Herodotus’ engagement with aetiological discussions throughout the Histories. Chapter Two indicates how the reading of the proem laid out in Chapter One allows for Herodotus’ deployment of aetiology in the Egyptian logos (especially where the pharaoh Psammetichus’ investigation of the origins of Egyptian language, nature, and custom are concerned) to be viewed within the methodological continuum of the Histories at large. Chapter Three connects Herodotus’ programmatic interest in the origins of erga (i.e. “works” or “achievements” manifested as monuments and deeds of abstract and concrete sorts) with the patterns addressed in Chapters One and Two. Chapter Four examines aetiological narratives in the Scythian logos and argues through them that this logos is as integral to the Histories as the analogous Egyptian logos studied in Chapter Two. Chapter Five demonstrates how the aetiologies associated with the Greeks’ collaboration with the Persians (i.e. medism) in the lead-up to the battle of Thermopylae recapitulate programmatic patterns isolated in previous chapters and thereby extend the methodological continuum of the Histories beyond the “ethnographic” logoi to some of the most representative “historical” logoi of Herodotus’ work. Chapter Six concludes the dissertation and makes one final case for methodological cohesion by showing the inextricability of the end of the Histories from its beginning.