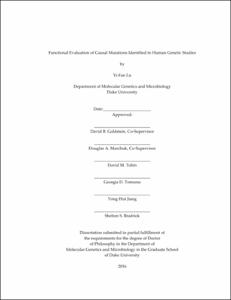 Human genetics has been experiencing a wave of genetic discoveries thanks to the development of several technologies, such as genome-wide association studies (GWAS), whole-exome sequencing, and whole genome sequencing. Despite the massive genetic discoveries of new variants associated with human diseases, several key challenges emerge following the genetic discovery. GWAS is known to be good at identifying the locus associated with the patient phenotype. However, the actually causal variants responsible for the phenotype are often elusive. Another challenge in human genetics is that even the causal mutations are already known, the underlying biological effect might remain largely ambiguous. Functional evaluation plays a key role to solve these key challenges in human genetics both to identify causal variants responsible for the phenotype, and to further develop the biological insights from the disease-causing mutations.

We adopted various methods to characterize the effects of variants identified in human genetic studies, including patient genetic and phenotypic data, RNA chemistry, molecular biology, virology, and multi-electrode array and primary neuronal culture systems. Chapter 1 is a broader introduction for the motivation and challenges for functional evaluation in human genetic studies, and the background of several genetics discoveries, such as hepatitis C treatment response, in which we performed functional characterization.

Chapter 2 focuses on the characterization of causal variants following the GWAS study for hepatitis C treatment response. We characterized a non-coding SNP (rs4803217) of IL28B (IFNL3) in high linkage disequilibrium (LD) with the discovery SNP identified in the GWAS. In this chapter, we used inter-disciplinary approaches to characterize rs4803217 on RNA structure, disease association, and protein translation.

Chapter 3 describes another avenue of functional characterization following GWAS focusing on the novel transcripts and proteins identified near the IL28B (IFNL3) locus. It has been recently speculated that this novel protein, which was named IFNL4, may affect the HCV treatment response and clearance. In this chapter, we used molecular biology, virology, and patient genetic and phenotypic data to further characterize and understand the biology of IFNL4. The efforts in chapter 2 and 3 provided new insights to the candidate causal variant(s) responsible for the GWAS for HCV treatment response, however, more evidence is still required to make claims for the exact causal roles of these variants for the GWAS association.

Overall, this dissertation spans a range of challenges of functional evaluations in human genetics. It is expected that the functional characterization to understand human mutations will become more central in human genetics, because there are still many biological questions remaining to be answered after the explosion of human genetic discoveries. The recent advance in several technologies, including genome editing and pluripotent stem cells, is also expected to make new tools available for functional studies in human diseases.