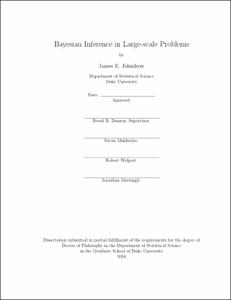 Many modern applications fall into the category of "large-scale" statistical problems, in which both the number of observations n and the number of features or parameters p may be large. Many existing methods focus on point estimation, despite the continued relevance of uncertainty quantification in the sciences, where the number of parameters to estimate often exceeds the sample size, despite huge increases in the value of n typically seen in many fields. Thus, the tendency in some areas of industry to dispense with traditional statistical analysis on the basis that "n=all" is of little relevance outside of certain narrow applications. The main result of the Big Data revolution in most fields has instead been to make computation much harder without reducing the importance of uncertainty quantification. Bayesian methods excel at uncertainty quantification, but often scale poorly relative to alternatives. This conflict between the statistical advantages of Bayesian procedures and their substantial computational disadvantages is perhaps the greatest challenge facing modern Bayesian statistics, and is the primary motivation for the work presented here.

Two general strategies for scaling Bayesian inference are considered. The first is the development of methods that lend themselves to faster computation, and the second is design and characterization of computational algorithms that scale better in n or p. In the first instance, the focus is on joint inference outside of the standard problem of multivariate continuous data that has been a major focus of previous theoretical work in this area. In the second area, we pursue strategies for improving the speed of Markov chain Monte Carlo algorithms, and characterizing their performance in large-scale settings. Throughout, the focus is on rigorous theoretical evaluation combined with empirical demonstrations of performance and concordance with the theory.

One topic we consider is modeling the joint distribution of multivariate categorical data, often summarized in a contingency table. Contingency table analysis routinely relies on log-linear models, with latent structure analysis providing a common alternative. Latent structure models lead to a reduced rank tensor factorization of the probability mass function for multivariate categorical data, while log-linear models achieve dimensionality reduction through sparsity. Little is known about the relationship between these notions of dimensionality reduction in the two paradigms. In Chapter 2, we derive several results relating the support of a log-linear model to nonnegative ranks of the associated probability tensor. Motivated by these findings, we propose a new collapsed Tucker class of tensor decompositions, which bridge existing PARAFAC and Tucker decompositions, providing a more flexible framework for parsimoniously characterizing multivariate categorical data. Taking a Bayesian approach to inference, we illustrate empirical advantages of the new decompositions.

In contingency table analysis, sparse data is frequently encountered for even modest numbers of variables, resulting in non-existence of maximum likelihood estimates. A common solution is to obtain regularized estimates of the parameters of a log-linear model. Bayesian methods provide a coherent approach to regularization, but are often computationally intensive. Conjugate priors ease computational demands, but the conjugate Diaconis--Ylvisaker priors for the parameters of log-linear models do not give rise to closed form credible regions, complicating posterior inference. In Chapter 4 we derive the optimal Gaussian approximation to the posterior for log-linear models with Diaconis--Ylvisaker priors, and provide convergence rate and finite-sample bounds for the Kullback-Leibler divergence between the exact posterior and the optimal Gaussian approximation. We demonstrate empirically in simulations and a real data application that the approximation is highly accurate, even in relatively small samples. The proposed approximation provides a computationally scalable and principled approach to regularized estimation and approximate Bayesian inference for log-linear models.

Another challenging and somewhat non-standard joint modeling problem is inference on tail dependence in stochastic processes. In applications where extreme dependence is of interest, data are almost always time-indexed. Existing methods for inference and modeling in this setting often cluster extreme events or choose window sizes with the goal of preserving temporal information. In Chapter 5, we propose an alternative paradigm for inference on tail dependence in stochastic processes with arbitrary temporal dependence structure in the extremes, based on the idea that the information on strength of tail dependence and the temporal structure in this dependence are both encoded in waiting times between exceedances of high thresholds. We construct a class of time-indexed stochastic processes with tail dependence obtained by endowing the support points in de Haan's spectral representation of max-stable processes with velocities and lifetimes. We extend Smith's model to these max-stable velocity processes and obtain the distribution of waiting times between extreme events at multiple locations. Motivated by this result, a new definition of tail dependence is proposed that is a function of the distribution of waiting times between threshold exceedances, and an inferential framework is constructed for estimating the strength of extremal dependence and quantifying uncertainty in this paradigm. The method is applied to climatological, financial, and electrophysiology data.

The remainder of this thesis focuses on posterior computation by Markov chain Monte Carlo. The Markov Chain Monte Carlo method is the dominant paradigm for posterior computation in Bayesian analysis. It has long been common to control computation time by making approximations to the Markov transition kernel. Comparatively little attention has been paid to convergence and estimation error in these approximating Markov Chains. In Chapter 6, we propose a framework for assessing when to use approximations in MCMC algorithms, and how much error in the transition kernel should be tolerated to obtain optimal estimation performance with respect to a specified loss function and computational budget. The results require only ergodicity of the exact kernel and control of the kernel approximation accuracy. The theoretical framework is applied to approximations based on random subsets of data, low-rank approximations of Gaussian processes, and a novel approximating Markov chain for discrete mixture models.