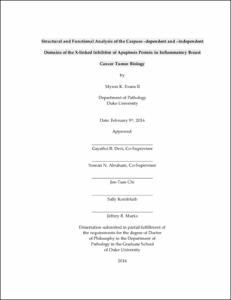 Inflammatory breast cancer (IBC) is an extremely rare but highly aggressive form of breast cancer characterized by the rapid development of therapeutic resistance leading to particularly poor survival. Our previous work focused on the elucidation of factors that mediate therapeutic resistance in IBC and identified increased expression of the anti-apoptotic protein, X-linked inhibitor of apoptosis protein (XIAP), to correlate with the development of resistance to chemotherapeutics. Although XIAP is classically thought of as an inhibitor of caspase activation, multiple studies have revealed that XIAP can also function as a signaling intermediate in numerous pathways. Based on preliminary evidence revealing high expression of XIAP in pre-treatment IBC cells rather than only subsequent to the development of resistance, we hypothesized that XIAP could play an important signaling role in IBC pathobiology outside of its heavily published apoptotic inhibition function. Further, based on our discovery of inhibition of chemotherapeutic efficacy, we postulated that XIAP overexpression might also play a role in resistance to other forms of therapy, such as immunotherapy. Finally, we posited that targeting of specific redox adaptive mechanisms, which are observed to be a significant barrier to successful treatment of IBC, could overcome therapeutic resistance and enhance the efficacy of chemo-, radio-, and immuno- therapies. To address these hypotheses our objectives were: 1. to determine a role for XIAP in IBC pathobiology and to elucidate the upstream regulators and downstream effectors of XIAP; 2. to evaluate and describe a role for XIAP in the inhibition of immunotherapy; and 3. to develop and characterize novel redox modulatory strategies that target identified mechanisms to prevent or reverse therapeutic resistance.

Using various genomic and proteomic approaches, combined with analysis of cellular viability, proliferation, and growth parameters both in vitro and in vivo, we demonstrate that XIAP plays a central role in both IBC pathobiology in a manner mostly independent of its role as a caspase-binding protein. Modulation of XIAP expression in cells derived from patients prior to any therapeutic intervention significantly altered key aspects IBC biology including, but not limited to: IBC-specific gene signatures; the tumorigenic capacity of tumor cells; and the metastatic phenotype of IBC, all of which are revealed to functionally hinge on XIAP-mediated NFκB activation, a robust molecular determinant of IBC. Identification of the mechanism of XIAP-mediated NFκB activation led to the characterization of novel peptide-based antagonist which was further used to identify that increased NFκB activation was responsible for redox adaptation previously observed in therapy-resistant IBC cells. Lastly, we describe the targeting of this XIAP-NFκB-ROS axis using a novel redox modulatory strategy both in vitro and in vivo. Together, the data presented here characterize a novel and crucial role for XIAP both in therapeutic resistance and the pathobiology of IBC; these results confirm our previous work in acquired therapeutic resistance and establish the feasibility of targeting XIAP-NFκB and the redox adaptive phenotype of IBC as a means to enhance survival of patients.