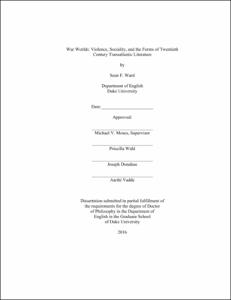 “War Worlds” reads twentieth-century British and Anglophone literature to examine the social practices of marginal groups (pacifists, strangers, traitors, anticolonial rebels, queer soldiers) during the world wars. This dissertation shows that these diverse “enemies within” England and its colonies—those often deemed expendable for, but nonetheless threatening to, British state and imperial projects—provided writers with alternative visions of collective life in periods of escalated violence and social control. By focusing on the social and political activities of those who were not loyal citizens or productive laborers within the British Empire, “War Worlds” foregrounds the small group, a form of collectivity frequently portrayed in the literature of the war years but typically overlooked in literary critical studies. I argue that this shift of focus from grand politics to small groups not only illuminates surprising social fissures within England and its colonies but provides a new vantage from which to view twentieth-century experiments in literary form.