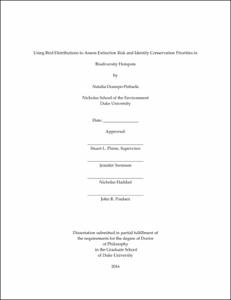 Habitat loss, fragmentation, and degradation threaten the World’s ecosystems and species. These, and other threats, will likely be exacerbated by climate change. Due to a limited budget for conservation, we are forced to prioritize a few areas over others. These places are selected based on their uniqueness and vulnerability. One of the most famous examples is the biodiversity hotspots: areas where large quantities of endemic species meet alarming rates of habitat loss. Most of these places are in the tropics, where species have smaller ranges, diversity is higher, and ecosystems are most threatened.

Species distributions are useful to understand ecological theory and evaluate extinction risk. Small-ranged species, or those endemic to one place, are more vulnerable to extinction than widely distributed species. However, current range maps often overestimate the distribution of species, including areas that are not within the suitable elevation or habitat for a species. Consequently, assessment of extinction risk using these maps could underestimate vulnerability.

In order to be effective in our quest to conserve the World’s most important places we must: 1) Translate global and national priorities into practical local actions, 2) Find synergies between biodiversity conservation and human welfare, 3) Evaluate the different dimensions of threats, in order to design effective conservation measures and prepare for future threats, and 4) Improve the methods used to evaluate species’ extinction risk and prioritize areas for conservation. The purpose of this dissertation is to address these points in Colombia and other global biodiversity hotspots.

In Chapter 2, I identified the global, strategic conservation priorities and then downscaled to practical local actions within the selected priorities in Colombia. I used existing range maps of 171 bird species to identify priority conservation areas that would protect the greatest number of species at risk in Colombia (endemic and small-ranged species). The Western Andes had the highest concentrations of such species—100 in total—but the lowest densities of national parks. I then adjusted the priorities for this region by refining these species ranges by selecting only areas of suitable elevation and remaining habitat. The estimated ranges of these species shrank by 18–100% after accounting for habitat and suitable elevation. Setting conservation priorities on the basis of currently available range maps excluded priority areas in the Western Andes and, by extension, likely elsewhere and for other taxa. By incorporating detailed maps of remaining natural habitats, I made practical recommendations for conservation actions. One recommendation was to restore forest connections to a patch of cloud forest about to become isolated from the main Andes.

For Chapter 3, I identified areas where bird conservation met ecosystem service protection in the Central Andes of Colombia. Inspired by the November 11th (2011) landslide event near Manizales, and the current poor results of Colombia’s Article 111 of Law 99 of 1993 as a conservation measure in this country, I set out to prioritize conservation and restoration areas where landslide prevention would complement bird conservation in the Central Andes. This area is one of the most biodiverse places on Earth, but also one of the most threatened. Using the case of the Rio Blanco Reserve, near Manizales, I identified areas for conservation where endemic and small-range bird diversity was high, and where landslide risk was also high. I further prioritized restoration areas by overlapping these conservation priorities with a forest cover map. Restoring forests in bare areas of high landslide risk and important bird diversity yields benefits for both biodiversity and people. I developed a simple landslide susceptibility model using slope, forest cover, aspect, and stream proximity. Using publicly available bird range maps, refined by elevation, I mapped concentrations of endemic and small-range bird species. I identified 1.54 km2 of potential restoration areas in the Rio Blanco Reserve, and 886 km2 in the Central Andes region. By prioritizing these areas, I facilitate the application of Article 111 which requires local and regional governments to invest in land purchases for the conservation of watersheds.

Chapter 4 dealt with elevational ranges of montane birds and the impact of lowland deforestation on their ranges in the Western Andes of Colombia, an important biodiversity hotspot. Using point counts and mist-nets, I surveyed six altitudinal transects spanning 2200 to 2800m. Three transects were forested from 2200 to 2800m, and three were partially deforested with forest cover only above 2400m. I compared abundance-weighted mean elevation, minimum elevation, and elevational range width. In addition to analyzing the effect of deforestation on 134 species, I tested its impact within trophic guilds and habitat preference groups. Abundance-weighted mean and minimum elevations were not significantly different between forested and partially deforested transects. Range width was marginally different: as expected, ranges were larger in forested transects. Species in different trophic guilds and habitat preference categories showed different trends. These results suggest that deforestation may affect species’ elevational ranges, even within the forest that remains. Climate change will likely exacerbate harmful impacts of deforestation on species’ elevational distributions. Future conservation strategies need to account for this by protecting connected forest tracts across a wide range of elevations.

In Chapter 5, I refine the ranges of 726 species from six biodiversity hotspots by suitable elevation and habitat. This set of 172 bird species for the Atlantic Forest, 138 for Central America, 100 for the Western Andes of Colombia, 57 for Madagascar, 102 for Sumatra, and 157 for Southeast Asia met the criteria for range size, endemism, threat, and forest use. Of these 586 species, the Red List deems 108 to be threatened: 15 critically endangered, 29 endangered, and 64 vulnerable. When ranges are refined by elevational limits and remaining forest cover, 10 of those critically endangered species have ranges < 100km2, but then so do 2 endangered species, seven vulnerable, and eight non-threatened ones. Similarly, 4 critically endangered species, 20 endangered, and 12 vulnerable species have refined ranges < 5000km2, but so do 66 non-threatened species. A striking 89% of these species I have classified in higher threat categories have <50% of their refined ranges inside protected areas. I find that for 43% of the species I assessed, refined range sizes fall within thresholds that typically have higher threat categories than their current assignments. I recommend these species for closer inspection by those who assess risk. These assessments are not only important on a species-by-species basis, but by combining distributions of threatened species, I create maps of conservation priorities. They differ significantly from those created from unrefined ranges.