A Mechanical Analysis of Suspensory Locomotion in Primates and Other Mammals 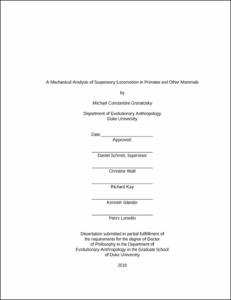 For primates, and other arboreal mammals, adopting suspensory locomotion represents one of the strategies an animal can use to prevent toppling off a thin support during arboreal movement and foraging. While numerous studies have reported the incidence of suspensory locomotion in a broad phylogenetic sample of mammals, little research has explored what mechanical transitions must occur in order for an animal to successfully adopt suspensory locomotion. Additionally, many primate species are capable of adopting a highly specialized form of suspensory locomotion referred to as arm-swinging, but few scenarios have been posited to explain how arm-swinging initially evolved. This study takes a comparative experimental approach to explore the mechanics of below branch quadrupedal locomotion in primates and other mammals to determine whether above and below branch quadrupedal locomotion represent neuromuscular mirrors of each other, and whether the patterns below branch quadrupedal locomotion are similar across taxa. Also, this study explores whether the nature of the flexible coupling between the forelimb and hindlimb observed in primates is a uniquely primate feature, and investigates the possibility that this mechanism could be responsible for the evolution of arm-swinging.

To address these research goals, kinetic, kinematic, and spatiotemporal gait variables were collected from five species of primate (Cebus capucinus, Daubentonia madagascariensis, Lemur catta, Propithecus coquereli, and Varecia variegata) walking quadrupedally above and below branches. Data from these primate species were compared to data collected from three species of non-primate mammals (Choloepus didactylus, Pteropus vampyrus, and Desmodus rotundus) and to three species of arm-swinging primate (Hylobates moloch, Ateles fusciceps, and Pygathrix nemaeus) to determine how varying forms of suspensory locomotion relate to each other and across taxa.