Ink Under the Fingernails: Making Print in Nineteenth-Century Mexico City 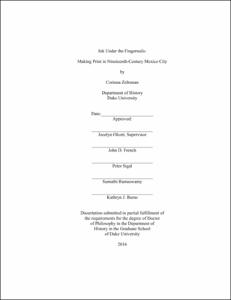 This dissertation examines Mexico City’s material politics of print—the central actors engaged in making print, their activities and relationships, and the legal, business, and social dimensions of production—across the nineteenth century. Inside urban printshops, a socially diverse group of men ranging from manual laborers to educated editors collaborated to make the printed items that fueled political debates and partisan struggles in the new republic. By investigating how print was produced, regulated, and consumed, this dissertation argues that printers shaped some of the most pressing conflicts that marked Mexico’s first formative century: over freedom of expression, the role of religion in government, and the emergence of liberalism. Printers shaped debates not only because they issued texts that fueled elite politics but precisely because they operated at the nexus where new liberal guarantees like freedom of the press and intellectual property intersected with politics and patronage, the regulatory efforts of the emerging state, and the harsh realities of a post-colonial economy.

Historians of Mexico have typically approached print as a vehicle for texts written by elites, which they argue contributed to the development of a national public sphere or print culture in spite of low literacy levels. By shifting the focus to print’s production, my work instead reveals that a range of urban residents—from prominent printshop owners to government ministers to street vendors—produced, engaged, and deployed printed items in contests unfolding in the urban environment. As print increasingly functioned as a political weapon in the decades after independence, print production itself became an arena in struggles over the emerging contours of politics and state formation, even as printing technologies remained relatively unchanged over time.

This work examines previously unexplored archival documents, including official correspondence, legal cases, business transactions, and printshop labor records, to shed new light on Mexico City printers’ interactions with the emerging national government, and reveal the degree to which heated ideological debates emerged intertwined with the most basic concerns over the tangible practices of print. By delving into the rich social and cultural world of printing—described by intellectuals and workers alike in memoirs, fiction, caricatures and periodicals— it also considers how printers’ particular status straddling elite and working worlds led them to challenge boundaries drawn by elites that separated manual and intellectual labors. Finally, this study engages the full range of printed documents made in Mexico City printshops not just as texts but also as objects with particular visual and material qualities whose uses and meanings were shaped not only by emergent republicanism but also by powerful colonial legacies that generated ambivalent attitudes towards print’s transformative power.