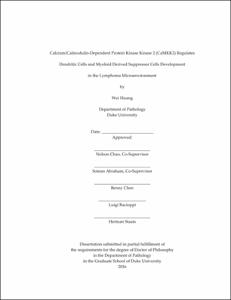 Calcium (Ca2+) is a known important second messenger. Calcium/Calmodulin (CaM) dependent protein kinase kinase 2 (CaMKK2) is a crucial kinase in the calcium signaling cascade. Activated by Ca2+/CaM, CaMKK2 can phosphorylate other CaM kinases and AMP-activated protein kinase (AMPK) to regulate cell differentiation, energy balance, metabolism and inflammation. Outside of the brain, CaMKK2 can only be detected in hematopoietic stem cells and progenitors, and in the subsets of mature myeloid cells. CaMKK2 has been noted to facilitate tumor cell proliferation in prostate cancer, breast cancer, and hepatic cancer. However, whethter CaMKK2 impacts the tumor microenvironment especially in hematopoietic malignancies remains unknown. Due to the relevance of myeloid cells in tumor growth, we hypothesized that CaMKK2 has a critical role in the tumor microenvironment, and tested this hyopothesis in murine models of hematological and solid cancer malignancies.

In conclusion, we demonstrate that CaMKK2 expressed in myeloid cells is an important checkpoint in tumor microenvironment. Ablating CaMKK2 suppresses lymphoma growth by promoting myeloid cells development thereby decreasing MDSCs while enhancing the anti-tumor immune response. CaMKK2 inhibition is an innovative strategy for cancer therapy through reprogramming the tumor microenvironment.