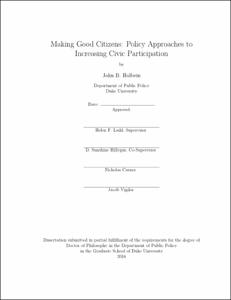 In this dissertation, I explore the impact of several public policies on civic participation. Using a unique combination of school administrative and public–use voter files and methods for causal inference, I evaluate the impact of three new, as of yet unexplored, policies: one informational, one institutional, and one skill–based. Chapter 2 examines the causal effect of No Child Left Behind’s performance-based accountability school failure signals on turnout in school board elections and on individuals’ use of exit. I find that failure signals mobilize citizens both at the ballot box and by encouraging them to vote with their feet. However, these increases in voice and exit come primarily from citizens who already active—thus exacerbating inequalities in both forms of participation. Chapter 3 examines the causal effect of preregistration—an electoral reform that allows young citizens to enroll in the electoral system before turning 18, while also providing them with various in-school supports. Using data from the Current Population Survey and Florida Voter Files and multiple methods for causal inference, I (with my coauthor listed below) show that preregistration mobilizes and does so for a diverse set of citizens. Finally, Chapter 4 examines the impact of psychosocial or so called non-cognitive skills on voter turnout. Using information from the Fast Track intervention, I show that early– childhood investments in psychosocial skills have large, long-run spillovers on civic participation. These gains are widely distributed, being especially large for those least likely to participate. These chapters provide clear insights that reach across disciplinary boundaries and speak to current policy debates. In placing specific attention not only on whether these programs mobilize, but also on who they mobilize, I provide scholars and practitioners with new ways of thinking about how to address stubbornly low and unequal rates of citizen engagement.