Other Than a Citizen: Vernacular Poetics in Postwar America 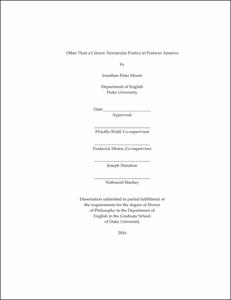 Few symbols of 1950s-1960s America remain as central to our contemporary conception of Cold War culture as the iconic ranch-style suburban home. While the house took center stage in the Nixon/Khrushchev kitchen debates as a symbol of modern efficiency and capitalist values, its popularity depended largely upon its obvious appropriation of vernacular architecture from the 19th century, those California haciendas and Texas dogtrots that dotted the American west. Contractors like William Levitt modernized the historical common houses, hermetically sealing their porous construction, all while using the ranch-style roots of the dwelling to galvanize a myth of an indigenous American culture. At a moment of intense occupational bureaucracy, political uncertainty and atomized social life, the rancher gave a self-identifying white consumer base reason to believe they could master their own plot in the expansive frontier. Only one example of America’s mid-century love affair with commodified vernacular forms, the ranch-style home represents a broad effort on the part of corporate and governmental interest groups to transform the vernacular into a style that expresses a distinctly homogenous vision of American culture. “Other than a Citizen” begins with an anatomy of that transformation, and then turns to the work of four poets who sought to reclaim the vernacular from that process of standardization and use it to countermand the containment-era strategies of Cold War America.

In four chapters, I trace references to common speech and verbal expressivity in the poetry and poetic theory of Charles Olson, Robert Duncan, LeRoi Jones/Amiri Baraka and Gwendolyn Brooks, against the historical backdrop of the Free-Speech Movement and the rise of mass-culture. When poets frame nonliterary speech within the literary page, they encounter the inability of writing to capture the vital ephemerality of verbal expression. Rather than treat this limitation as an impediment, the writers in my study use the poem to dramatize the fugitivity of speech, emphasizing it as a disruptive counterpoint to the technologies of capture. Where critics such as Houston Baker interpret the vernacular strictly in terms of resistance, I take a cue from the poets and argue that the vernacular, rooted etymologically at the intersection of domestic security and enslaved margin, represents a gestalt form, capable at once of establishing centralized power and sparking minor protest. My argument also expands upon Michael North’s exploration of the influence of minstrelsy and regionalism on the development of modernist literary technique in The Dialect of Modernism. As he focuses on writers from the early 20th century, I account for the next generation, whose America was not a culturally inferior collection of immigrants but an imperial power, replete with economic, political and artistic dominance. Instead of settling for an essentially American idiom, the poets in my study saw in the vernacular not phonetic misspellings, slang terminology and fragmented syntax, but the potential to provoke and thereby frame a more ethical mode of social life, straining against the regimentation of citizenship.

My attention to the vernacular argues for an alignment among writers who have been segregated by the assumption that race and aesthetics are mutually exclusive categories. In reading these writers alongside one another, “Other than a Citizen” shows how the avant-garde concepts of projective poetics and composition by field develop out of an interest in black expressivity. Conversely, I trace black radicalism and its emphasis on sociality back to the communalism practiced at the experimental arts college in Black Mountain, North Carolina, where Olson and Duncan taught. In pressing for this connection, my work reveals the racial politics embedded within the speech-based aesthetics of the postwar era, while foregrounding the aesthetic dimension of militant protest.

Not unlike today, the popular rhetoric of the Cold War insists that to be a citizen involves defending one’s status as a rightful member of an exclusionary nation. To be other than a citizen, as the poets in my study make clear, begins with eschewing the false certainty that accompanies categorical nominalization. In promoting a model of mutually dependent participation, these poets lay the groundwork for an alternative model of civic belonging, where volition and reciprocity replace compliance and self-sufficiency. In reading their lines, we become all the more aware of the cracks that run the length of our load-bearing walls.