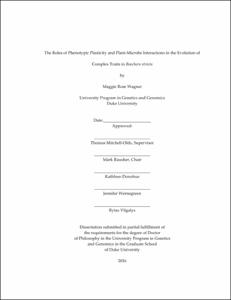 All organisms live in complex habitats that shape the course of their evolution by altering the phenotype expressed by a given genotype (a phenomenon known as phenotypic plasticity) and simultaneously by determining the evolutionary fitness of that phenotype. In some cases, phenotypic evolution may alter the environment experienced by future generations. This dissertation describes how genetic and environmental variation act synergistically to affect the evolution of glucosinolate defensive chemistry and flowering time in Boechera stricta, a wild perennial herb. I focus particularly on plant-associated microbes as a part of the plant’s environment that may alter trait evolution and in turn be affected by the evolution of those traits. In the first chapter I measure glucosinolate production and reproductive fitness of over 1,500 plants grown in common gardens in four diverse natural habitats, to describe how patterns of plasticity and natural selection intersect and may influence glucosinolate evolution. I detected extensive genetic variation for glucosinolate plasticity and determined that plasticity may aid colonization of new habitats by moving phenotypes in the same direction as natural selection. In the second chapter I conduct a greenhouse experiment to test whether naturally-occurring soil microbial communities contributed to the differences in phenotype and selection that I observed in the field experiment. I found that soil microbes cause plasticity of flowering time but not glucosinolate production, and that they may contribute to natural selection on both traits; thus, non-pathogenic plant-associated microbes are an environmental feature that could shape plant evolution. In the third chapter, I combine a multi-year, multi-habitat field experiment with high-throughput amplicon sequencing to determine whether B. stricta-associated microbial communities are shaped by plant genetic variation. I found that plant genotype predicts the diversity and composition of leaf-dwelling bacterial communities, but not root-associated bacterial communities. Furthermore, patterns of host genetic control over associated bacteria were largely site-dependent, indicating an important role for genotype-by-environment interactions in microbiome assembly. Together, my results suggest that soil microbes influence the evolution of plant functional traits and, because they are sensitive to plant genetic variation, this trait evolution may alter the microbial neighborhood of future B. stricta generations. Complex patterns of plasticity, selection, and symbiosis in natural habitats may impact the evolution of glucosinolate profiles in Boechera stricta.