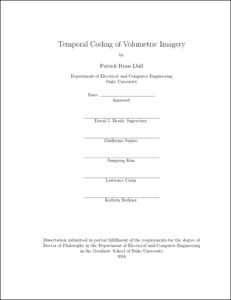 'Image volumes' refer to realizations of images in other dimensions such as time, spectrum, and focus. Recent advances in scientific, medical, and consumer applications demand improvements in image volume capture. Though image volume acquisition continues to advance, it maintains the same sampling mechanisms that have been used for decades; every voxel must be scanned and is presumed independent of its neighbors. Under these conditions, improving performance comes at the cost of increased system complexity, data rates, and power consumption.

This dissertation explores systems and methods capable of efficiently improving sensitivity and performance for image volume cameras, and specifically proposes several sampling strategies that utilize temporal coding to improve imaging system performance and enhance our awareness for a variety of dynamic applications.

Video cameras and camcorders sample the video volume (x,y,t) at fixed intervals to gain understanding of the volume's temporal evolution. Conventionally, one must reduce the spatial resolution to increase the framerate of such cameras. Using temporal coding via physical translation of an optical element known as a coded aperture, the compressive temporal imaging (CACTI) camera emonstrates a method which which to embed the temporal dimension of the video volume into spatial (x,y) measurements, thereby greatly improving temporal resolution with minimal loss of spatial resolution. This technique, which is among a family of compressive sampling strategies developed at Duke University, temporally codes the exposure readout functions at the pixel level.

Since video cameras nominally integrate the remaining image volume dimensions (e.g. spectrum and focus) at capture time, spectral (x,y,t,\lambda) and focal (x,y,t,z) image volumes are traditionally captured via sequential changes to the spectral and focal state of the system, respectively. The CACTI camera's ability to embed video volumes into images leads to exploration of other information within that video; namely, focal and spectral information. The next part of the thesis demonstrates derivative works of CACTI: compressive extended depth of field and compressive spectral-temporal imaging. These works successfully show the technique's extension of temporal coding to improve sensing performance in these other dimensions.

Geometrical optics-related tradeoffs, such as the classic challenges of wide-field-of-view and high resolution photography, have motivated the development of mulitscale camera arrays. The advent of such designs less than a decade ago heralds a new era of research- and engineering-related challenges. One significant challenge is that of managing the focal volume (x,y,z) over wide fields of view and resolutions. The fourth chapter shows advances on focus and image quality assessment for a class of multiscale gigapixel cameras developed at Duke.