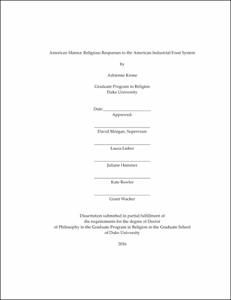 “American Manna: Religious Responses to the American Industrial Food System” is an investigation of the religious complexity present in religious food reform movements. I conducted ethnographic fieldwork at four field sites. These field sites are a Jewish organic vegetable farm where the farmers begin their days with meditation, a Christian raw vegan diet center run by Messianic Jews, a Christian family that raises their cattle on pastures and sends them to a halal processing plant for slaughter, and a Jewish farm where Christian and Buddhist farm staff helped to implement shmita, the biblical agricultural sabbatical year.

Chapter 1 serves as the introduction, literature review, and methodology overview. Chapter 2 focuses on the food-centered Judaism at the Adamah Environmental Fellowship at the Isabella Freedman Jewish Retreat Center in Falls Village, CT. In Chapter 3, I discuss the Hallelujah Diet as prescriptive literature and as it is put into practice at the Hallelujah Diet Retreat Center in Lake Lure, NC. Chapter 4 follows cows as they move from the grassy hills of Baldwin Family Farms in Yanceyville, NC to the meat counter at Whole Foods Markets. In Chapter 5, I consider the shmita year, the biblical agricultural sabbatical practice that was reimagined and implemented at Pearlstone Center in Baltimore, MD during 2014-2015. Chapter 6 will conclude this dissertation with a discussion of where religious food reform has been, where it is now, and a glimpse of what the future holds.