Essays on the Dynamic Decisions of Homeowners and Retailers 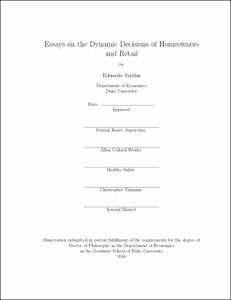 Urban problems have several features that make them inherently dynamic. Large transaction costs all but guarantee that homeowners will do their best to consider how a neighborhood might change before buying a house. Similarly, stores face large sunk costs when opening, and want to be sure that their investment will pay off in the long run. In line with those concerns, different areas of Economics have made recent advances in modeling those questions within a dynamic framework. This dissertation contributes to those efforts.

Chapter 2 discusses how to model an agent’s location decision when the agent must learn about an exogenous amenity that may be changing over time. The model is applied to estimating the marginal willingness to pay to avoid crime, in which agents are learning about the crime rate in a neighborhood, and the crime rate can change in predictable (Markovian) ways.

Chapters 3 and 4 concentrate on location decision problems when there are externalities between decision makers. Chapter 3 focuses on the decision of business owners to open a store, when its demand is a function of other nearby stores, either through competition, or through spillovers on foot traffic. It uses a dynamic model in continuous time to model agents’ decisions. A particular challenge is isolating the contribution of spillovers from the contribution of other unobserved neighborhood attributes that could also lead to agglomeration. A key contribution of this chapter is showing how we can use information on storefront ownership to help separately identify spillovers.

Finally, chapter 4 focuses on a class of models in which families prefer to live

close to similar neighbors. This chapter provides the first simulation of such a model in which agents are forward looking, and shows that this leads to more segregation than it would have been observed with myopic agents, which is the standard in this literature. The chapter also discusses several extensions of the model that can be used to investigate relevant questions such as the arrival of a large contingent high skilled tech workers in San Francisco, the immigration of hispanic families to several southern American cities, large changes in local amenities, such as the construction of magnet schools or metro stations, and the flight of wealthy residents from cities in the Rust belt, such as Detroit.