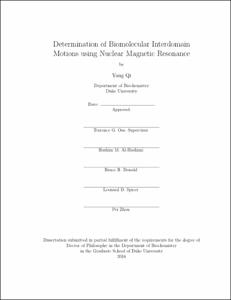 The protocol described above can be applied to other biological systems in general. Protein molecule calmodulin and RNA molecule trans-activation response element (TAR) also have intensive interdomain motions with relative small intradomain dynamics. Their interdomain motions were studied using our method based on published RDC data. Our results were consistent with literature results in general. The differences could be due to previous studies' use of physical models, which contain assumptions about potential energy and thus introduced non-experimental information into the interpretations.