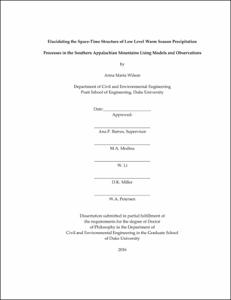 Light rainfall is the baseline input to the annual water budget in mountainous landscapes through the tropics and at mid-latitudes. In the Southern Appalachians, the contribution from light rainfall ranges from 50-60% during wet years to 80-90% during dry years, with convective activity and tropical cyclone input providing most of the interannual variability. The Southern Appalachians is a region characterized by rich biodiversity that is vulnerable to land use/land cover changes due to its proximity to a rapidly growing population. Persistent near surface moisture and associated microclimates observed in this region has been well documented since the colonization of the area in terms of species health, fire frequency, and overall biodiversity. The overarching objective of this research is to elucidate the microphysics of light rainfall and the dynamics of low level moisture in the inner region of the Southern Appalachians during the warm season, with a focus on orographically mediated processes. The overarching research hypothesis is that physical processes leading to and governing the life cycle of orographic fog, low level clouds, and precipitation, and their interactions, are strongly tied to landform, land cover, and the diurnal cycles of flow patterns, radiative forcing, and surface fluxes at the ridge-valley scale. The following science questions will be addressed specifically: 1) How do orographic clouds and fog affect the hydrometeorological regime from event to annual scale and as a function of terrain characteristics and land cover?; 2) What are the source areas, governing processes, and relevant time-scales of near surface moisture convergence patterns in the region?; and 3) What are the four dimensional microphysical and dynamical characteristics, including variability and controlling factors and processes, of fog and light rainfall? The research was conducted with two major components: 1) ground-based high-quality observations using multi-sensor platforms and 2) interpretive numerical modeling guided by the analysis of the in situ data collection. Findings illuminate a high level of spatial – down to the ridge scale - and temporal – from event to annual scale - heterogeneity in observations, and a significant impact on the hydrological regime as a result of seeder-feeder interactions among fog, low level clouds, and stratiform rainfall that enhance coalescence efficiency and lead to significantly higher rainfall rates at the land surface. Specifically, results show that enhancement of an event up to one order of magnitude in short-term accumulation can occur as a result of concurrent fog presence. Results also show that events are modulated strongly by terrain characteristics including elevation, slope, geometry, and land cover. These factors produce interactions between highly localized flows and gradients of temperature and moisture with larger scale circulations. Resulting observations of DSD and rainfall patterns are stratified by region and altitude and exhibit clear diurnal and seasonal cycles.