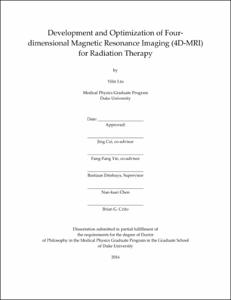 A tenet of modern radiotherapy (RT) is to identify the treatment target accurately, following which the high-dose treatment volume may be expanded into the surrounding tissues in order to create the clinical and planning target volumes. Respiratory motion can induce errors in target volume delineation and dose delivery in radiation therapy for thoracic and abdominal cancers. Historically, radiotherapy treatment planning in the thoracic and abdominal regions has used 2D or 3D images acquired under uncoached free-breathing conditions, irrespective of whether the target tumor is moving or not. Once the gross target volume has been delineated, standard margins are commonly added in order to account for motion. However, the generic margins do not usually take the target motion trajectory into consideration. That may lead to under- or over-estimate motion with subsequent risk of missing the target during treatment or irradiating excessive normal tissue. That introduces systematic errors into treatment planning and delivery. In clinical practice, four-dimensional (4D) imaging has been popular in For RT motion management. It provides temporal information about tumor and organ at risk motion, and it permits patient-specific treatment planning. The most common contemporary imaging technique for identifying tumor motion is 4D computed tomography (4D-CT). However, CT has poor soft tissue contrast and it induce ionizing radiation hazard. In the last decade, 4D magnetic resonance imaging (4D-MRI) has become an emerging tool to image respiratory motion, especially in the abdomen, because of the superior soft-tissue contrast. Recently, several 4D-MRI techniques have been proposed, including prospective and retrospective approaches. Nevertheless, 4D-MRI techniques are faced with several challenges: 1) suboptimal and inconsistent tumor contrast with large inter-patient variation; 2) relatively low temporal-spatial resolution; 3) it lacks a reliable respiratory surrogate. In this research work, novel 4D-MRI techniques applying MRI weightings that was not used in existing 4D-MRI techniques, including T2/T1-weighted, T2-weighted and Diffusion-weighted MRI were investigated. A result-driven phase retrospective sorting method was proposed, and it was applied to image space as well as k-space of MR imaging. Novel image-based respiratory surrogates were developed, improved and evaluated.