The Role of Adaptor Proteins in T Cell Development, Activation, and Homeostasis 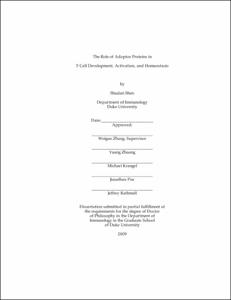 Linker for activation of T cells (LAT) is a transmembrane adaptor protein that lacks any intrinsic enzymatic or transcriptional activity. Upon TCR engagement, LAT is phosphorylated at its membrane-distal tyrosine residues, which mediate the binding of Grb2/Sos, PLC&#947;1, and GADS/SLP-76 complexes. SLP-76 (SH2 domain-containing leukocyte protein of 76kD) is a cytosolic adaptor protein that can interact with a variety of other adaptor proteins and signaling effectors. Through its constitutive binding of GADS, SLP-76 is recruited to the plasma membrane via LAT following TCR stimulation. Together, LAT and SLP-76 nucleate a large multi-molecular signaling complex, which couples TCR proximal signaling to downstream biochemical events, including calcium mobilization and Ras-MAPK pathway activation.

LAT is important in early thymocyte development as LAT-deficient mice have a complete block at the DN3 stage. To study the role of LAT beyond the DN3 stage, we generated mice in which the lat gene could be deleted by Cre recombinase. Deletion of LAT after the DN3 stage allowed largely normal development of DP thymocytes. However, LAT-deficient DP thymocytes were severely defective in responding to stimulation via the TCR and failed to efficiently differentiate into SP thymocytes. Moreover, deletion of LAT in peripheral mature T cells rendered these T cells completely unresponsive to CD3 crosslinking due to abolished calcium mobilization and Ras-ERK activation. Long-term survival and lymphopenia-driven homeostatic proliferation of the LAT-deficient naïve T cells were also severely impaired. Together, these data indicate that, in addition to its role in pre-TCR signaling, LAT also plays an essential role in thymocyte development during the transition from the DP to SP stage, as well as in mature T cell activation and homeostasis.

Similar to LAT, SLP-76 is also critical for T cell function and thymocyte development. While the functions of various SLP-76 domains have been extensively studied, the role of the sterile alpha motif (SAM) domain in SLP 76 function remains unknown. By generating SLP 76 knock in mice with the SAM domain deleted, we showed that the absence of the SAM domain resulted in impaired positive and negative thymic selections, leading to a partial block of thymocyte development at the DP to SP transition. TCR-mediated IP3 production, calcium flux, and ERK activation were all decreased in these &#916;SAM-SLP-76 knockin T cells, leading to defective IL 2 production and proliferation. Moreover, despite normal association between GADS and SLP-76, TCR-mediated SLP 76 clustering was inhibited by the deletion of the SAM domain, likely causing the aforementioned TCR signaling defects. These data demonstrated for the first time that the SAM domain is indispensable for optimal SLP-76 signaling.