The Land of the Savior: Óscar Romero and the Reform of Agriculture 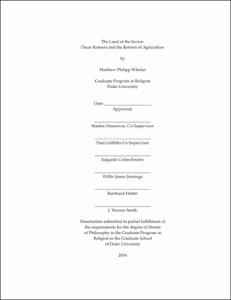 This study approaches Óscar Romero by attending to his intimate involvement in and concern for the problematic surrounding the reform of Salvadoran agriculture and the conflict over property and possession underlying it. In this study, I situate Romero in relation to the concentration of landholding and the production of landlessness in El Salvador over the course of the twentieth century, and I examine his participation in the longstanding societal and ecclesial debate about agrarian reform provoked by these realities. I try to show how close attention to agrarian reform and what was at stake in it can illumine not only the conflict that occasioned Romero’s martyrdom but the meaning of the martyrdom itself.

Understanding Romero’s involvement in the debate about agrarian reform requires sustained attention to how it takes its bearings from the line of thinking about property and possession for which Pope Leo XIII’s 1891 encyclical Rerum novarum stands as a new beginning. The enclyclical tradition developing out of Leo’s pontificate is commonly referred to as Catholic social doctrine or Catholic social teaching. Romero’s and the Church’s participation in the debate about agrarian reform in El Salvador is unintelligible apart from it.

What Romero and the encyclical tradition share, I argue, is an understanding of creation as a common gift, from which follows a distinctive construal of property and the demands of justice with respect to possessing it. On this view, property does not name, as it is often taken to mean, the enclosure of what is common for the exclusive use of its possessors—something to be held by them over and against others. Rather, property and everything related to its holding derive from the claim that creation is a gift given to human creatures in common. The acknowledgement of creation as a common gift gives rise to what I describe in this study as a politics of common use, of which agrarian reform is one expression.

In Romero’s El Salvador, those who took the truth of creation as common gift seriously—those who spoke out against or opposed the ubiquity of the concentration of land and who clamored for agrarian reform so that the landless and land-poor could have access to land to cultivate for subsistence—suffered greatly as a consequence. I argue that, among other things, their suffering shows how, under the conditions of sin and violence, those who work to ensure that others have access to what is theirs in justice often risk laying down their lives in charity. In other words, they witness to the way that God’s work to restore creation has a cruciform shape. Therefore, while the advocacy for agrarian reform begins with the understanding of creation as common gift, the testimony to this truth in word and in deed points to the telos of the gift and the common life in the crucified and risen Lord in which it participates