Mount Carmel in the Commune: Promoting the Holy Land in Central Italy in the 13th and 14th Centuries 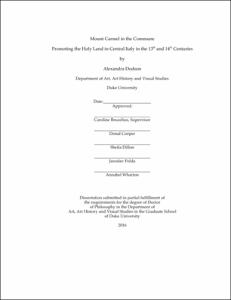 The Carmelite friars were the last of the major mendicant orders to be established in Italy. Originally an eremitical order, they arrived from the Holy Land in the 1240s, decades after other mendicant orders, such as the Franciscans and Dominicans, had constructed churches and cultivated patrons in the burgeoning urban centers of central Italy. In a religious market already saturated with friars, the Carmelites distinguished themselves by promoting their Holy Land provenance, eremitical values, and by developing an institutional history claiming to be descendants of the Old Testament prophet Elijah. By the end of the 13th century the order had constructed thriving churches and convents and leveraged itself into a prominent position in the religious community. My dissertation analyzes these early Carmelite churches and convents, as well as the friars’ interactions with patrons, civic governments, and the urban space they occupied. Through three primary case studies – the churches and convents of Pisa, Siena and Florence – I examine the Carmelites’ approach to art, architecture, and urban space as the order transformed its mission from one of solitary prayer to one of active ministry.

My central questions are these: To what degree did the Carmelites’ Holy Land provenance inform the art and architecture they created for their central Italian churches? And to what degree was their visual culture instead a reflection of the mendicant norms of the time?

I have sought to analyze the Carmelites at the institutional level, to determine how the order viewed itself and how it wanted its legacy to develop. I then seek to determine how and if the institutional model was utilized in the artistic and architectural production of the individual convents. The understanding of Carmelite art as a promotional tool for the identity of the order is not a new one, however my work is the first to consider deeply the order’s architectural aspirations. I also consider the order’s relationships with its de facto founding saint, the prophet Elijah, and its patron, the Virgin Mary, in a more comprehensive manner that situates the resultant visual culture into the contemporary theological and historical contexts.