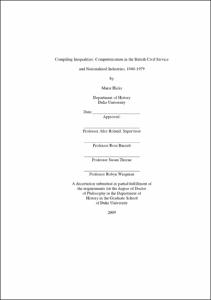 In the 1950s and early 1960s, Great Britain's computing industry led the world in the development and application of computers for business and administrative work. The British government and civil service, paragons of meritocracy in a country stratified by class, committed themselves to implementing computerized data processing techniques throughout the sprawling public sector, in order to modernize their economy, maintain the competitiveness of British high-technology industries, and reconsolidate the nation's strength and reputation worldwide. To succeed in this project, the British government would need to leverage the country's existing expertise, cultivate the heterogeneous field of computing manufacturers, and significantly re-train labor.

By the 1970s, Britain's early lead in the field of computing had evaporated, government computing projects had produced disappointing results, and the nation's status as a world power had declined precipitously. This dissertation seeks to explain why British computing achieved so few of its intended results by looking at the intractable labor problems within the public sector during the heyday of the Britain's proclaimed "technological revolution." The dissertation argues that the interpretation of, and solutions for, these labor problems produced disastrous effects.

Sources used include government documents, civil service records, records of the nationalized industries (the Post Office, National Health Service, Central Electricity Generating Board, Coal Industry, Railways, and others), computing industry records, press accounts, and oral interviews. By using methodologies from the history of technology, institutional history, and labor history, as well as gender analysis, this dissertation shows that despite the government's commitment to both high technology usage and labor meritocracy, competing claims of technological expertise and management tradition led the government to misjudge the role of computing within the public sector and the nation.

Beginning with a labor situation in which women did the majority of computing work, and seeking to achieve a situation in which young men and management-level technocrats tightly controlled all digital computing, the British government over-centralized its own computing endeavors, and the nation's computing industry, leading to a dangerous winnowing of skill and expertise within the already-small field. The eventual takeover of the British computing market by IBM, and purchase of the last viable British computing company by Fujitsu, marked the end of any hope for Britain's computing dominance in either their home market or the global market.

While multiple factors contributed to the failures of government computing and the British computing industry--including, but not limited to, American competition, inability to effectively create a global market for British machines, and misjudging the public sector's computing needs--this dissertation argues that labor problems, arising largely from gendered concerns about technological change and power, constituted a critical, and unrecognized, stumbling block for Britain's government-led computing revolution.