Can a Broader Education Narrow the Gap? Evidence on Non-Academic Features of Schooling 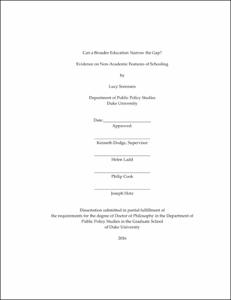 Empirical studies of education programs and systems, by nature, rely upon use of student outcomes that are measurable. Often, these come in the form of test scores. However, in light of growing evidence about the long-run importance of other student skills and behaviors, the time has come for a broader approach to evaluating education. This dissertation undertakes experimental, quasi-experimental, and descriptive analyses to examine social, behavioral, and health-related mechanisms of the educational process. My overarching research question is simply, which inside- and outside-the-classroom features of schools and educational interventions are most beneficial to students in the long term? Furthermore, how can we apply this evidence toward informing policy that could effectively reduce stark social, educational, and economic inequalities?

The first study of three assesses mechanisms by which the Fast Track project, a randomized intervention in the early 1990s for high-risk children in four communities (Durham, NC; Nashville, TN; rural PA; and Seattle, WA), reduced delinquency, arrests, and health and mental health service utilization in adolescence through young adulthood (ages 12-20). A decomposition of treatment effects indicates that about a third of Fast Track’s impact on later crime outcomes can be accounted for by improvements in social and self-regulation skills during childhood (ages 6-11), such as prosocial behavior, emotion regulation and problem solving. These skills proved less valuable for the prevention of mental and physical health problems.

The third study examines individual pathways that lead to high school graduation or dropout. It employs a variety of machine learning techniques, including decision trees, random forests with bagging and boosting, and support vector machines, to predict student dropout using longitudinal administrative data from North Carolina. I consider a large set of predictor measures from grades three through eight including academic achievement, behavioral indicators, and background characteristics. My findings indicate that the most important predictors include eighth grade absences, math scores, and age-for-grade as well as early reading scores. Support vector classification (with a high cost parameter and low gamma parameter) predicts high school dropout with the highest overall validity in the testing dataset at 90.1 percent followed by decision trees with boosting and interaction terms at 89.5 percent.