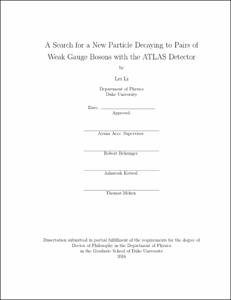 A search for new heavy resonances decaying to boson pairs (WZ, WW or ZZ) using 20.3 inverse femtobarns of proton-proton collision data at a center of mass energy of 8 TeV is presented. The data were recorded by the ATLAS detector at the Large Hadron Collider (LHC) in 2012. The analysis combines several search channels with the leptonic, semi-leptonic and fully hadronic final states. The diboson invariant mass spectrum is studied for local excesses above the Standard Model background prediction, and no significant excess is observed for the combined analysis. 95$\%$ confidence limits are set on the cross section times branching ratios for three signal models: an extended gauge model with a heavy W boson, a bulk Randall-Sundrum model with a spin-2 graviton, and a simplified model with a heavy vector triplet. Among the individual search channels, the fully-hadronic channel is predominantly presented where boson tagging technique and jet substructure cuts are used. Local excesses are found in the dijet mass distribution around 2 TeV, leading to a global significance of 2.5 standard deviations. This deviation from the Standard Model prediction results in many theory explanations, and the possibilities could be further explored using the LHC Run 2 data.