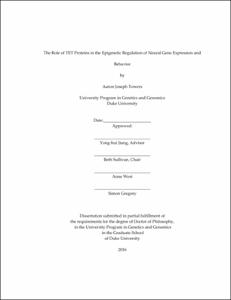 Understanding how genes affect behavior is critical to develop precise therapies for human behavioral disorders. The ability to investigate the relationship between genes and behavior has been greatly advanced over the last few decades due to progress in gene-targeting technology. Recently, the Tet gene family was discovered and implicated in epigenetic modification of DNA methylation by converting 5-methylcytosine to 5-hydroxymethylcytosine (5hmC). 5hmC and its catalysts, the TET proteins, are highly abundant in the postnatal brain but with unclear functions. To investigate their neural functions, we generated new lines of Tet1 and Tet3 mutant mice using a gene targeting approach. We designed both mutations to cause a frameshift by deleting the largest coding exon of Tet1 (Tet1Δe4) and the catalytic domain of Tet3 (Tet3Δe7-9). As Tet1 is also highly expressed in embryonic stem cells (ESCs), we generated Tet1 homozygous deleted ESCs through sequential targeting to compare the function of Tet1 in the brain to its role in ESCs. To test our hypothesis that TET proteins epigenetically regulate transcription of key neural genes important for normal brain function, we examined transcriptional and epigenetic differences in the Tet1Δe4 mouse brain. The oxytocin receptor (OXTR), a neural gene implicated in social behaviors, is suggested to be epigenetically regulated by an unknown mechanism. Interestingly, several human studies have found associations between OXTR DNA hypermethylation and a wide spectrum of behavioral traits and neuropsychiatric disorders including autism spectrum disorders. Here we report the first evidence for an epigenetic mechanism of Oxtr transcription as expression of Oxtr is reduced in the brains of Tet1Δe4-/- mice. Likewise, the CpG island overlapping the promoter of Oxtr is hypermethylated during early embryonic development and persists into adulthood. We also discovered altered histone modifications at the hypermethylated regions, indicating the loss of TET1 has broad effects on the chromatin structure at Oxtr. Unexpectedly, we discovered an array of novel mRNA isoforms of Oxtr that are selectively reduced in Tet1Δe4-/- mice. Additionally, Tet1Δe4-/- mice display increased agonistic behaviors and impaired maternal care and short-term memory. Our findings support a novel role for TET1 in regulating Oxtr expression by preventing DNA hypermethylation and implicate TET1 in social behaviors, offering novel insight into Oxtr epigenetic regulation and its role in neuropsychiatric disorders.