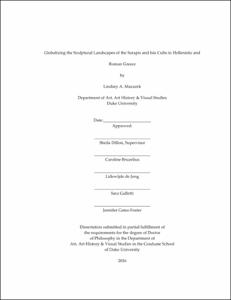 “Globalizing the Sculptural Landscape of Isis and Sarapis Cults in Roman Greece,” asks questions of cross-cultural exchange and viewership of sculptural assemblages set up in sanctuaries to the Egyptian gods. Focusing on cognitive dissonance, cultural imagining, and manipulations of time and space, I theorize ancient globalization as a set of loosely related processes that shifted a community's connections with place. My case studies range from the 3rd century BCE to the 2nd century CE, including sanctuaries at Rhodes, Thessaloniki, Dion, Marathon, Gortyna, and Delos. At these sites, devotees combined mainstream Greco-Roman sculptures, Egyptian imports, and locally produced imitations of Egyptian artifacts. In the last case, local sculptors represented Egyptian subjects with Greco-Roman naturalistic styles, creating an exoticized visual ideal that had both local and global resonance. My dissertation argues that the sculptural assemblages set up in Egyptian sanctuaries allowed each community to construct complex narratives about the nature of the Egyptian gods. Further, these images participated in a form of globalization that motivated local communities to adopt foreign gods and reinterpret them to suit local needs.

I begin my dissertation by examining how Isis and Sarapis were represented in Greece. My first chapter focuses on single statues of Egyptian gods, describing their iconographies and stylistic tendencies through examples from Corinth and Gortyna. By comparing Greek examples with images of Sarapis, Isis, and Harpokrates from around the Mediterranean, I demonstrate that Greek communities relied on globally available visual tropes rather than creating site or region-specific interpretations. In the next section, I examine what other sources viewers drew upon to inform their experiences of Egyptian sculpture. In Chapter 3, I survey the textual evidence for Isiac cult practice in Greece as a way to reconstruct devotees’ expectations of sculptures in sanctuary contexts. At the core of this analysis are Apuleius’ Metamorphoses and Plutarch’s De Iside et Osiride, which offer a Greek perspective on the cult’s theology. These literary works rely on a tradition of aretalogical inscriptions—long hymns produced from roughly the late 4th century B.C.E. into the 4th century C.E. that describe the expansive syncretistic powers of Isis, Sarapis, and Harpokrates. This chapter argues that the textual evidence suggests that devotees may have expected their images to be especially miraculous and likely to intervene on their behalf, particularly when involved in ritual activity inside the sanctuary.

In the final two chapters, I consider sculptural programs and ritual activity in concert with sanctuary architecture. My fourth chapter focuses on sanctuaries where large amounts of sculpture were found in underground water crypts: Thessaloniki and Rhodes. These groups of statues can be connected to a particular sanctuary space, but their precise display contexts are not known. By reading these images together, I argue that local communities used these globally available images to construct new interpretations of these gods, ones that explored the complex intersections of Egyptian, Greek, and Roman identities in a globalized Mediterranean. My final chapter explores the Egyptian sanctuary at Marathon, a site where exceptional preservation allows us to study how viewers would have experienced images in architectural space. Using the Isiac visuality established in Chapter 3, I reconstruct the viewer's experience, arguing that the patron, Herodes Atticus, intended his viewer to inform his experience with the complex theology of Middle Platonism and prevailing elite attitudes about Roman imperialism.

Throughout my dissertation, I diverge from traditional approaches to culture change that center on the concepts of Romanization and identity. In order to access local experiences of globalization, I examine viewership on a micro-scale. I argue that viewers brought their concerns about culture change into dialogue with elements of cult, social status, art, and text to create new interpretations of Roman sculpture sensitive to the challenges of a highly connected Mediterranean world. In turn, these transcultural perspectives motivated Isiac devotees to create assemblages that combined elements from multiple cultures. These expansive attitudes also inspired Isiac devotees to commission exoticized images that brought together disparate cultures and styles in an eclectic manner that mirrored the haphazard way that travel brought change to the Mediterranean world. My dissertation thus offers a more theoretically rigorous way of modeling culture change in antiquity that recognizes local communities’ agency in producing their cultural landscapes, reconciling some of the problems of scale that have plagued earlier approaches to provincial Roman art.

These case studies demonstrate that cultural anxieties played a key role in how viewers experienced artistic imagery in the Hellenistic and Roman Mediterranean. This dissertation thus offers a new component in our understanding of ancient visuality, and, in turn, a better way to analyze how local communities dealt with the rise of connectivity and globalization.