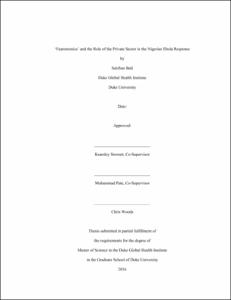 Background: Outbreaks of infectious diseases such as Ebola have dramatic economic impacts on affected nations due to significant direct costs and indirect costs, as well as increased expenditure by the government to meet the health and security crisis. Despite its dense population, Nigeria was able to contain the outbreak swiftly and was declared Ebola free on 13th October 2014. Although Nigeria’s Ebola containment success was multifaceted, the private sector played a key role in Nigeria’s fight against Ebola. An epidemic of a disease like Ebola, not only consumes health resources but also detrimentally disrupts trade and travel to impact both public and private sector resulting in the ‘fearonomic’ effect of the contagion. In this thesis, I have defined ‘fearonomics’ or the ‘fearonomic effects’ of a disease as the intangible and intangible economic effects of both informed and misinformed aversion behavior exhibited by individuals, organizations, or countries during an outbreak. During an infectious disease outbreak, there is a significant potential for public-private sector collaborations that can help offset some of the government’s cost of controlling the epidemic.

Objective: The main objective of this study is to understand the ‘fearonomics’ of Ebola in Nigeria and to evaluate the role of the key private sector stakeholders in Nigeria’s Ebola response.

Methods: This retrospective qualitative study was conducted in Nigeria and utilizes grounded theory to look across different economic sectors in Nigeria to understand the impact of Ebola on Nigeria’s private sector and how it dealt with the various challenges posed by the disease and its ‘fearonomic effects'.

Results: Due to swift containment of Ebola in Nigeria, the economic impact of the disease was limited especially in comparison to the other Ebola-infected countries such as Liberia, Sierra Leone, and Guinea. However, the 2014 Ebola outbreak had more than a just direct impact on the country’s economy and despite the swift containment, no economic sector was immune to the disease’s fearonomic impact. The potential scale of the fearonomic impact of a disease like Ebola was one of the key motivators for the private sector engagement in the Ebola response.

The private sector in Nigeria played an essential role in facilitating the country’s response to Ebola. The private sector not only provided in-cash donations but significant in-kind support to both the Federal and State governments during the outbreak. Swift establishment of an Ebola Emergency Operation Centre (EEOC) was essential to the country’s response and was greatly facilitated by the private sector, showcasing the crucial role of private sector in the initial phase of an outbreak. The private sector contributed to Nigeria’s fight against Ebola not only by donating material assets but by continuing operations and partaking in knowledge sharing and advocacy. Some sector such as the private health sector, telecom sector, financial sector, oil and gas sector played a unique role in orchestrating the Nigerian Ebola response and were among the first movers during the outbreak.

This paper utilizes the lessons from Nigeria’s containment of Ebola to highlight the potential of public-private partnerships in preparedness, response, and recovery during an outbreak.