Knowledge Modeling for The Outcome of Brain Stereotactic Radiosurgery 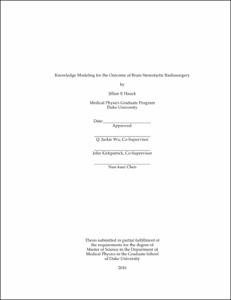 Purpose: To build a model that will predict the survival time for patients that were treated with stereotactic radiosurgery for brain metastases using support vector machine (SVM) regression.

Methods and Materials: This study utilized data from 481 patients, which were equally divided into training and validation datasets randomly. The SVM model used a Gaussian RBF function, along with various parameters, such as the size of the epsilon insensitive region and the cost parameter (C) that are used to control the amount of error tolerated by the model. The predictor variables for the SVM model consisted of the actual survival time of the patient, the number of brain metastases, the graded prognostic assessment (GPA) and Karnofsky Performance Scale (KPS) scores, prescription dose, and the largest planning target volume (PTV). The response of the model is the survival time of the patient. The resulting survival time predictions were analyzed against the actual survival times by single parameter classification and two-parameter classification. The predicted mean survival times within each classification were compared with the actual values to obtain the confidence interval associated with the model’s predictions. In addition to visualizing the data on plots using the means and error bars, the correlation coefficients between the actual and predicted means of the survival times were calculated during each step of the classification.

Conclusions: The number of metastases and the KPS score both showed to be strong predictors of patient survival time. The model was less accurate for patients with more metastases and certain KPS scores due to the lack of training data.