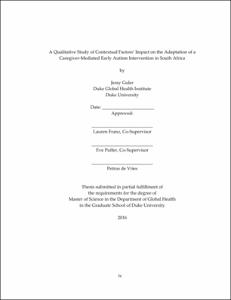 Background: Autism Spectrum Disorder (ASD) is a major global health challenge as the majority of individuals with ASD live in low- and middle-income countries (LMICs) and receive little to no services or support from health or social care systems. Despite this global crisis, the development and validation of ASD interventions has almost exclusively occurred in high-income countries, leaving many unanswered questions regarding what contextual factors would need to be considered to ensure the effectiveness of interventions in LMICs. This study sought to conduct explorative research on the contextual adaptation of a caregiver-mediated early ASD intervention for use in a low-resource setting in South Africa.

Conclusions: Eleven contextual factors were discussed in detail by caregivers and examples were given regarding the challenges, sources, and preferences related to the contextual adaptation of a parent-mediated early ASD intervention in South Africa. Caregivers reported a preference for an affordable, in-home, individualized early ASD intervention, where they have an active voice in shaping treatment goals. Distrust of community-based nurses and health workers to deliver an early ASD intervention and challenges associated with ASD-based stigma were two unanticipated findings from this data set. Implications for practice and further research are discussed.