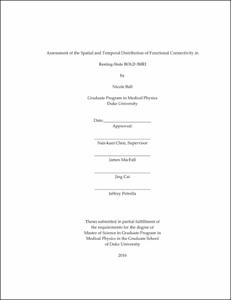 Recent research into resting-state functional magnetic resonance imaging (fMRI) has shown that the brain is very active during rest. This thesis work utilizes blood oxygenation level dependent (BOLD) signals to investigate the spatial and temporal functional network information found within resting-state data, and aims to investigate the feasibility of extracting functional connectivity networks using different methods as well as the dynamic variability within some of the methods. Furthermore, this work looks into producing valid networks using a sparsely-sampled sub-set of the original data.

In this work we utilize four main methods: independent component analysis (ICA), principal component analysis (PCA), correlation, and a point-processing technique. Each method comes with unique assumptions, as well as strengths and limitations into exploring how the resting state components interact in space and time.

Correlation is perhaps the simplest technique. Using this technique, resting-state patterns can be identified based on how similar the time profile is to a seed region’s time profile. However, this method requires a seed region and can only identify one resting state network at a time. This simple correlation technique is able to reproduce the resting state network using subject data from one subject’s scan session as well as with 16 subjects.

Independent component analysis, the second technique, has established software programs that can be used to implement this technique. ICA can extract multiple components from a data set in a single analysis. The disadvantage is that the resting state networks it produces are all independent of each other, making the assumption that the spatial pattern of functional connectivity is the same across all the time points. ICA is successfully able to reproduce resting state connectivity patterns for both one subject and a 16 subject concatenated data set.

Using principal component analysis, the dimensionality of the data is compressed to find the directions in which the variance of the data is most significant. This method utilizes the same basic matrix math as ICA with a few important differences that will be outlined later in this text. Using this method, sometimes different functional connectivity patterns are identifiable but with a large amount of noise and variability.

The last method introduced, a point processing method, is one of the more novel techniques because it does not require analysis of the continuous time points. Here, network information is extracted based on brief occurrences of high or low amplitude signals within a seed region. Because point processing utilizes less time points from the data, the statistical power of the results is lower. There are also larger variations in DMN patterns between subjects. In addition to boosted computational efficiency, the benefit of using a point-process method is that the patterns produced for different seed regions do not have to be independent of one another.