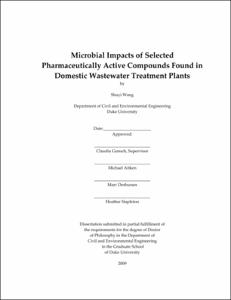 Large amounts of human pharmaceutical products are consumed worldwide. Many drugs and their metabolites, referred to as pharmaceutically active compounds (PhACs), are not fully metabolized prior to household discharge resulting in their common occurrence in wastewater treatment plants (WWTPs). In most instances, WWTPs present the first treatment opportunity for removing PhACs and preventing significant environmental exposure. Because most municipal WWTPs rely on the microbial component of the activated sludge process, there is a need to estimate the influence of PhACs in wastewater influent on the activated sludge microbial communities and the treatment performance of WWTPs. The objective of this dissertation was to determine the impact of selected PhACs (i.e., ketoprofen, naproxen, clofibric acid, carbamazepine and gemfibrozil) on activated sludge microorganisms and key individual microbial species in domestic wastewater treatment. Analyses were performed in batch reactors initially and then in laboratory-scale sequencing batch reactors (SBR) which mimic WWTP operations. Ammonia oxidizing bacteria (AOB) were selected as indicator organisms because of their importance in wastewater treatment and demonstrated sensitiveness to toxic compounds.

The batch experiments results suggested that microbial growth inhibition was correlated to organic loadings. In the presence of 0.2% (v/v) ethanol, significant inhibition, ranging from 34 to 43%, was observed for all PhACs other than clofibric acid.

Nitrification inhibition studies using Nitrosomonas europaea, a model AOB strain showed that ketoprofen, naproxen, carbamazepine and gemfibrozil inhibited nitrite production. The corresponding maximum nitrification inhibition rates were 25, 29, 22 and 26%, respectively. Inhibition was shown to increase with PhAC concentration for concentrations greater than 0.1 µM. Results from membrane integrity tests suggest that the inhibition may be due to the disturbance of the cell membrane by PhACs and such inhibition was shown to be irreversible.

Even though PhACs were shown to inhibit the nitrification rate in pure culture studies, the performance of SBRs exposed to individual PhACs was not adversely affected neither in terms of COD nor ammonia removal. Microbial fingerprinting for both total bacteria and AOB confirmed that no significant shifts occurred when microbial communities were exposed to PhACs. However, some PhACs introduced in binary mixture were found to both inhibit the nitrification of N. europaea as well as the performance of SBRs. The mixture composed of 0.5 &#956;M ketoprofen and 0.5 &#956;M naproxen showed significant inhibition (25%) on the nitrite production of N. europaea although neither 0.5 &#956;M ketoprofen nor 0.5 &#956;M naproxen had significant effect when presented alone. Similarly, both COD and ammonia removal were significantly impacted by binary mixtures of PhACs. These results suggest that mixture effects can play an important role in an overall treatment's nitrification potential and this phenomenon should be further investigated.