Politics and Poetics of the Novel: Using Domesticity to Create the Nation 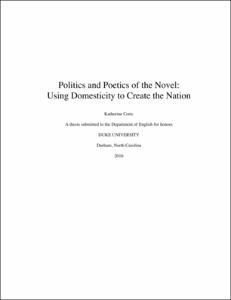 View / Download
245.4 Kb
Date
Author
Coric, Katherine
Advisor
Armstrong, Nancy
Repository Usage Stats
223
views
174
downloads
Abstract
This thesis examines how the depiction of the family during war reinforces or challenges societal values in three nineteenth-century novels. The primary focus lies in three novels by Sir Walter Scott, Leo Tolstoy, and Harriet Beecher Stowe that represent the perspectives of England, Russia, and the United States, respectively, and their evolving nationalism as the roots of the Napoleonic Wars and the American Civil War became visible. By investigating the interaction between economic classes, it can be concluded that the preservation of the family is inherently dependent on social status in some nations, while in others, it is integral to daily life regardless of class. The backdrop of impending war only serves to heighten national differences, overturn the organization of the family hierarchy, and redefine the idea of the modern household.
Type
Honors thesis
Department
English
Subject
nationalism
novel
nineteenth century
domesticity
family
war
Permalink
https://hdl.handle.net/10161/12376
Citation
Coric, Katherine (2016). Politics and Poetics of the Novel: Using Domesticity to Create the Nation. Honors thesis, Duke University. Retrieved from https://hdl.handle.net/10161/12376.
Collections
More Info
Show full item record