Bias on the Bench: How Judges’ Legal Backgrounds Influence Their Decisions 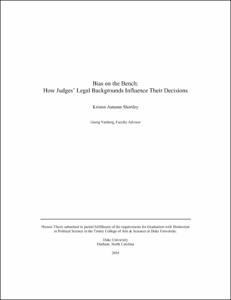 View / Download
532.0 Kb
Date
Author
Shortley, Kristen
Advisor
Vanberg, Georg
Repository Usage Stats
309
views
189
downloads
Abstract
The ideal conception of a judge is that of a neutral arbitrator. However, there exist good reasons to believe that personal characteristics, including professional experiences, bias judges. Such suspicions inspired two hypotheses: (1) judges that are former prosecutors are biased in favor of the government in criminal appeals; (2) judges that are former criminal defense attorneys are biased in favor of the criminal appellant. These hypotheses were tested by gathering professional information about state supreme court judges in the south during the years from 1995 until 1998. That was then matched to an existing database that recorded those judges’ demographics and decisions in criminal appeals during that time. Logistic regressions of that data revealed that despite when other characteristics, including gender, race, and legal experience, were accounted for, criminal defense remained a statistically significant predictor. Judges with a background in criminal defense were more likely to reverse criminal court decisions. In contrast, prosecutorial experience was not a good predictor of how a judge ruled. Judges that had backgrounds in prosecution did not rule much differently than those that did not have such a background.
Type
Honors thesis
Department
Political Science
Subject
judicial bias, implicit bias, judicial behavior, judicial background, criminal appeals, state supreme courts
Permalink
https://hdl.handle.net/10161/12392
Citation
Shortley, Kristen (2016). Bias on the Bench: How Judges’ Legal Backgrounds Influence Their Decisions. Honors thesis, Duke University. Retrieved from https://hdl.handle.net/10161/12392.
Collections
More Info
Show full item record