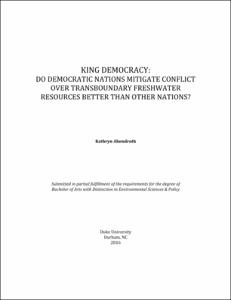 View / Download
5.1 Mb
Date
Author
Abendroth, Kathryn
Advisor
Jeuland, Marc Allan
Repository Usage Stats
276
views
333
downloads
Abstract
The prospect of water wars and conflict over water are ideas that are frequently dramatized in media and also studied by scholars. It is well-established that bona fide wars are not started over water resources, but conflict over water does exist and is not well understood. One would suppose, as scholars often do, that dyads composed of two democratic nations would be the best at mitigating conflict and promoting cooperation over freshwater resources. General conflict research supports that supposition, as does the argument that democracies must be best at avoiding conflicts over resources because they excel at distributing public goods. This study provides empirical evidence showing how interstate dyads composed of various governance types conflict and cooperate over general water and water quantity issues relative to each other. After evaluating the water conflict mitigating ability of democratic-democratic, democratic-autocratic, and autocratic-autocratic dyads, this study found that democracy-autocracy dyads are less likely to cooperate over general water issues and water quantity issues than the other two dyad types. Nothing certain can be said about how the three dyad types compare to each other in terms of likelihood to conflict over water quantity issues. However, two-autocracy dyads seem to be most likely to cooperate over water quantity issues. These findings support the established belief that democratic-autocratic pairs struggle to cooperate while also encouraging greater scrutiny of the belief that democracies must be best at cooperating over water resources.
Type
Honors thesis
Department
Environmental Sciences and Policy
Subject
international
public good
water quantity
war
autocracy
distribution
Permalink
https://hdl.handle.net/10161/12413
Citation
Abendroth, Kathryn (2016). King Democracy: Do Democratic Nations Mitigate Conflict Over Transboundary Freshwater Resources Better Than Other Nations?. Honors thesis, Duke University. Retrieved from https://hdl.handle.net/10161/12413.
Collections
More Info
Show full item record