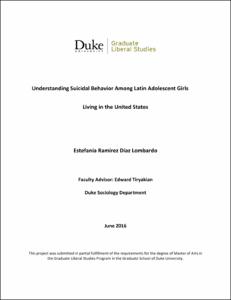 View / Download
1.7 Mb
Date
Author
Ramirez Diaz Lombardo, Estefania
Advisor
Tiryakian, Edward A
Repository Usage Stats
620
views
710
downloads
Abstract
Suicide in adolescents between the age of 10 and 24 years old is the second cause of death in the United States. This rate differentiates by ethnic and racial groups within the same country; Latino/Hispanic adolescent girls have the highest rate of suicide behavior. Considering that Latino/Hispanic is the fastest growing minority group in the nation, with an expected population of 30% by 2060, this issue should be a public health priority. This paper answers the following question: what are the conditions operating among Latin adolescent girls living in the United States that cause significantly higher suicidal behavior rates in the U.S. and compared with their peers in Latin American countries? And, how adequate are treatments such as Dialectical Behavioral Therapy and prevention programs in tackling the specific risk factors affecting this population? The paper is divided into five chapters; the first four are based on a comprehensive literature review of statistics of suicide, risk and protective factors, treatment, and prevention programs. The last chapter offers an analysis of the sociological phenomenon of suicidal behavior in this population and three brief narratives of attempters and non-attempters. Studies show that subjective distress, familism and immigration issues are the key risk factors of suicidal behavior in Latina adolescent girls. Understanding the risk factors is key in order to design promotion and prevention programs that are culturally relevant and that can have a positive impact in the reduction of this alarming phenomenon.
Type
Master's thesis
Department
Graduate Liberal Studies
Subject
Suicide
Suicidal Behavior
Latina
Adolescents
United States
Permalink
https://hdl.handle.net/10161/12425
Citation
Ramirez Diaz Lombardo, Estefania (2016). Understanding Suicidal Behavior Among Latin Adolescent Girls Living in the United States. Master's thesis, Duke University. Retrieved from https://hdl.handle.net/10161/12425.
Collections
More Info
Show full item record