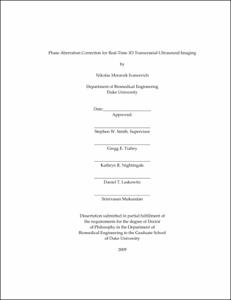 The feasibility of using phase aberration correction with 2D arrays and RT3D ultrasound was investigated. Using the multi-lag cross-correlation method on electronic and physical aberrators, we showed the ability of 3D phase aberration correction to increase anechoic cyst identification, image brightness, contrast-to-noise ratio (CNR), and, in 3D color Doppler experiments, the ability to visualize flow. With a physical aberrator, CNR increased by 13%, while the number of detectable cysts increased from 4.3 to 7.7.

We performed an institutional review board (IRB) approved clinical trial to assess the ability of a novel ultrasound technique, namely RT3D CE transcranial ultrasound. Using micro-bubble contrast agent, we scanned 17 healthy volunteers via a single temporal window and 9 via the sub-occipital window and report our detection rates for the major cerebral vessels. In 82% of subjects, we identified the ipsilateral circle of Willis from the temporal window, and in 65% we imaged the entire circle of Willis. From the sub-occipital window, we detected the entire vertebrobasilar circulation in 22% of subjects, and in 50% the basilar artery.

We then compared the performance of the multi-lag cross-correlation method with partial array reference on static and moving targets for an electronic aberrator. After showing that the multi-lag method performs better, we evaluated its performance with a physical aberrator. Using static targets, the correction resulted in an average contrast increase of 22.2%, compared to 13.2% using moving targets. The CNR increased by 20.5% and 12.8%, respectively. Doppler signal strength and number of Doppler voxels increased, by 5.6% and 14.4%, respectively, for the static method, and 9.3% and 4.9% for moving targets.

We performed two successful in vivo aberration corrections. We used this data and measure the isoplanatic patch size to be an average of 10.1°. The number of Doppler voxels increased by 38.6% and 19.2% for the two corrections. In both volunteers, correction enabled the visualization of a vessel not present in the uncorrected volume. These results are promising, and could potentially have a significant impact on public health.

Lastly, we show preliminary work testing the feasibility of a unique portable dedicated transcranial ultrasound system capable of simultaneous scanning from all three acoustic windows. Such a system would ideally be used in a preclinical setting, such as an ambulance.