Marriage or carriage? Trends in union context and birth type by education 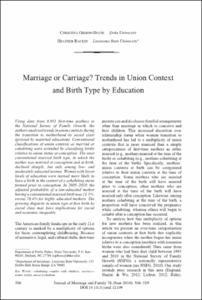 View / Download
693.4 Kb
Date
Authors
Gibson-Davis, C
Rackin, H
Repository Usage Stats
128
views
447
downloads
Abstract
Using data from 8,951 first-time mothers in the National Survey of Family Growth, the authors analyzed trends in union contexts during the transition to motherhood by social class (proxied by maternal education). Conventional classifications of union contexts as married or cohabiting were extended by classifying births relative to union status at conception. The most conventional married birth type, in which the mother was married at conception and at birth, declined sharply, but only among low- and moderately educated women. Women with lower levels of education were instead more likely to have a birth in the context of a cohabiting union formed prior to conception. In 2005-2010, the adjusted probability of a low-educated mother having a conventional married birth was 11.5%, versus 78.4% for highly educated mothers. The growing disparity in union type at first birth by social class may have implications for social and economic inequality. © National Council on Family Relations, 2014.
Type
Journal article
Permalink
https://hdl.handle.net/10161/12434
Published Version (Please cite this version)
10.1111/jomf.12109
Publication Info
Gibson-Davis, C; & Rackin, H (2014). Marriage or carriage? Trends in union context and birth type by education. Journal of Marriage and Family, 76(3). pp. 506-519. 10.1111/jomf.12109. Retrieved from https://hdl.handle.net/10161/12434.
This is constructed from limited available data and may be imprecise. To cite this article, please review & use the official citation provided by the journal.
Collections
More Info
Show full item record