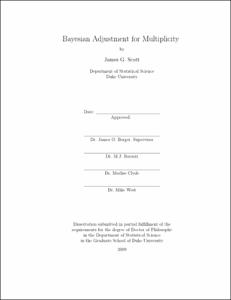 This thesis is about Bayesian approaches for handling multiplicity. It considers three main kinds of multiple-testing scenarios: tests of exchangeable experimental units, tests for variable inclusion in linear regresson models, and tests for conditional independence in jointly normal vectors. Multiplicity adjustment in these three areas will be seen to have many common structural features. Though the modeling approach throughout is Bayesian, frequentist reasoning regarding error rates will often be employed.

Chapter 1 frames the issues in the context of historical debates about Bayesian multiplicity adjustment. Chapter 2 confronts the problem of large-scale screening of functional data, where control over Type-I error rates is a crucial issue. Chapter 3 develops new theory for comparing Bayes and empirical-Bayes approaches for multiplicity correction in regression variable selection. Chapters 4 and 5 describe new theoretical and computational tools for Gaussian graphical-model selection, where multiplicity arises in performing many simultaneous tests of pairwise conditional independence. Chapter 6 introduces a new approach to sparse-signal modeling based upon local shrinkage rules. Here the focus is not on multiplicity per se, but rather on using ideas from Bayesian multiple-testing models to motivate a new class of multivariate scale-mixture priors. Finally, Chapter 7 describes some directions for future study, many of which are the subjects of my current research agenda.