Tor Signaling in the Fungal Kingdom 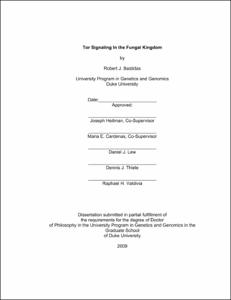 Fungal cells sense the amount and quality of external nutrients through multiple interconnected signaling networks, which allow them to adjust their metabolism, transcriptional profiles and developmental programs to adapt readily and appropriately to changing nutritional states. In organisms ranging from yeasts to humans, the Tor signaling pathway responds to nutrient-derived signals and orchestrates cell growth. While in the baker's yeast <italic>Saccharomyces cerevisiae</italic> Tor responds to nutrient-derived signals and orchestrates cell growth and proliferation, in <italic>Schizosaccharomyces pombe</italic> Tor signaling modulates sexual differentiation in response to nutritional cues. Thus, these differences provide a framework to consider the roles of Tor in other fungal organisms, in particular those that are pathogens of humans.

In this dissertation, I demonstrate that in the human fungal pathogen <italic>Candida albicans</italic>, Tor signaling also functions to promote growth. This study also uncovered a novel role for the Tor molecular pathway in promoting hyphal growth of <italic>C. albicans</italic> on semi-solid surfaces and in controlling cell-cell adherence. Gene expression analysis and genetic manipulations identified several transcriptional regulators (Bcr1, Efg1, Nrg1, and Tup1) that together with Tor compose a regulatory network governing adhesin gene expression and cellular adhesion. While the Tor kinases are broadly conserved, these studies further demonstrate the contrasting strategies employed by fungal organism in utilizing the Tor signaling cascade.

While extensive studies have focused on elucidating functions for the Tor signaling cascades among ascomycetes, little is known about the pathway in basal fungal lineages, in particular among zygomycetes and chytrids. Moreover, given that the Tor pathway is the target of several small molecule inhibitors including rapamycin, a versatile pharmacological drug used in medicine, there is considerable interest in Tor signaling pathways and their function. Capitalizing on emerging genome sequences now available for several basal fungal species, we show a remarkable pattern of conservation, duplication, and loss of the Tor signaling cascade among basal fungal lineages. Targeting the pathway with rapamycin results in growth arrest of several zygomycete species, indicating a conserved role for this pathway in regulating fungal growth. In addition, we show a potential therapeutic advantage of using rapamycin in a heterologous model of zygomycosis. Taken together, the Tor signaling cascade and its inhibitors provide robust platforms from which to develop novel antimicrobial therapies, which may include less immunosuppressive rapamycin analogs.