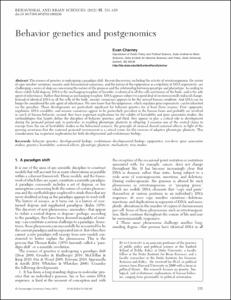 View / Download
1.3 Mb
Date
Author
Charney, Evan
Repository Usage Stats
165
views
944
downloads
Abstract
The science of genetics is undergoing a paradigm shift. Recent discoveries, including the activity of retrotransposons, the extent of copy number variations, somatic and chromosomal mosaicism, and the nature of the epigenome as a regulator of DNA expressivity, are challenging a series of dogmas concerning the nature of the genome and the relationship between genotype and phenotype. According to three widely held dogmas, DNA is the unchanging template of heredity, is identical in all the cells and tissues of the body, and is the sole agent of inheritance. Rather than being an unchanging template, DNA appears subject to a good deal of environmentally induced change. Instead of identical DNA in all the cells of the body, somatic mosaicism appears to be the normal human condition. And DNA can no longer be considered the sole agent of inheritance. We now know that the epigenome, which regulates gene expressivity, can be inherited via the germline. These developments are particularly significant for behavior genetics for at least three reasons: First, epigenetic regulation, DNA variability, and somatic mosaicism appear to be particularly prevalent in the human brain and probably are involved in much of human behavior; second, they have important implications for the validity of heritability and gene association studies, the methodologies that largely define the discipline of behavior genetics; and third, they appear to play a critical role in development during the perinatal period and, in particular, in enabling phenotypic plasticity in offspring. I examine one of the central claims to emerge from the use of heritability studies in the behavioral sciences, the principle of minimal shared maternal effects, in light of the growing awareness that the maternal perinatal environment is a critical venue for the exercise of adaptive phenotypic plasticity. This consideration has important implications for both developmental and evolutionary biology.
Type
Journal article
Subject
Brain
DNA Copy Number Variations
Developmental Biology
Epigenomics
Evolution, Molecular
Female
Genetic Association Studies
Genetics, Behavioral
Genomics
Genotype
Humans
Infant, Newborn
Mosaicism
Neuronal Plasticity
Phenotype
Pregnancy
Quantitative Trait, Heritable
Retroelements
Social Environment
Permalink
https://hdl.handle.net/10161/12648
Published Version (Please cite this version)
10.1017/S0140525X11002226
Publication Info
Charney, Evan (2012). Behavior genetics and postgenomics. Behav Brain Sci, 35(5). pp. 331-358. 10.1017/S0140525X11002226. Retrieved from https://hdl.handle.net/10161/12648.
This is constructed from limited available data and may be imprecise. To cite this article, please review & use the official citation provided by the journal.
Collections
More Info
Show full item record